“What do you think about when you cycle?” The waiter who served my Scotch broth and salmon fishcakes was curious about my hobby.

It was the only time that someone had asked me this. Usually people ask about my route, how far I cycle and what I have seen, but not much more.  This lad’s question was getting to the heart of what cycling is all about, what makes it such a pleasurable mode of transport.

This conversation concluded a fabulous day of country riding. It began with the B9005 out of Ellon towards Fyvie. It was drizzly, but the road was fast without much traffic. It is surrounded by fields, some flat, some hilly and some with grazing cows.

Road signs with wonderful sounding places caught my imagination - Drumwhindle, Quilquox and Feterletter. I wondered about the people who live there. What do they do for work? What are their homes like?

On entering the town of Methlick something got in my eye and I braked so I could rub it. The screech of the brakes scared about 40 sheep into hoofing across a field in the direction of the River Ythan. Oh no, what have I done? I held my breath, worried that the sheep would plunge into the water, but they gave up their run just before the edge. 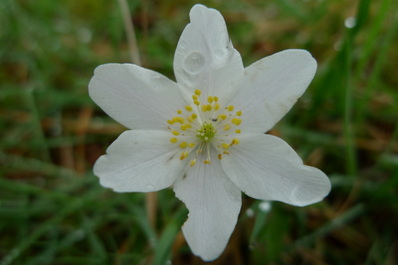 Wood anemone on the forest floor near Gight Castle
What are you looking at?

Methlick has a cricket ground, ruined church and a field of alpacas. Yes, you read right, a South American furry creature here in Scotland. They are bred for their quality fleece that is reputed to be softer than cashmere and comes in 22 natural shades.  They have a body like a sheep and long necks that reminded me of camels. They stared at me as if they had never seen a man riding a bike and I stared back because I have never seen alpacas.

The route began to climb and I arrived at a forest. It was time to take a break from the saddle and go for a walk in the woods. I passed an older man with a red nose and a tartan baseball cap who looked me up and down, “come on let’s see you run! You’ve got all that fancy gear on.”
When I explained that I was a cyclist, not a jogger, he said, “aye right enough, track is a bit rough fa’ that.”

I met no other person and could hear only chirping birds. There were clusters of tiny white and yellow flowers on the forest floor. I bent down to take a closer look and counted six white petals around minute yellow tentacles. I later read that these are wood anemone, a name that conjured up images of vibrantly coloured creatures on the ocean floor.

I emerged at a clearing that had a ruined castle with crumbling walls, trees growing out of windows, and foliage strangling it. If you want a stereotyped ruined Scottish castle, here it is.

“I love not man the less, but Nature more.” Lord Byron.

Gight Castle was built by the Gordon family in the sixteenth century and one of its most famous residents was the father of the famous poet Lord Byron.

The castle is surrounded by a fence as it is unsafe to explore. Although this is a beautiful spot in the day time I imagined that it could be spooky at night. It is haunted by the ghost of a piper who had disappeared after exploring a secret tunnel. The sound of bagpipes can sometimes be heard near the castle.

From a castle that is falling apart to a castle that is a grand, fairytale fantasy creation. Fyvie castle was my next stop and it was raining during the 6 mile cycle to reach it, so I kept my head down and looked forward to getting inside a warm and dry billiard room. 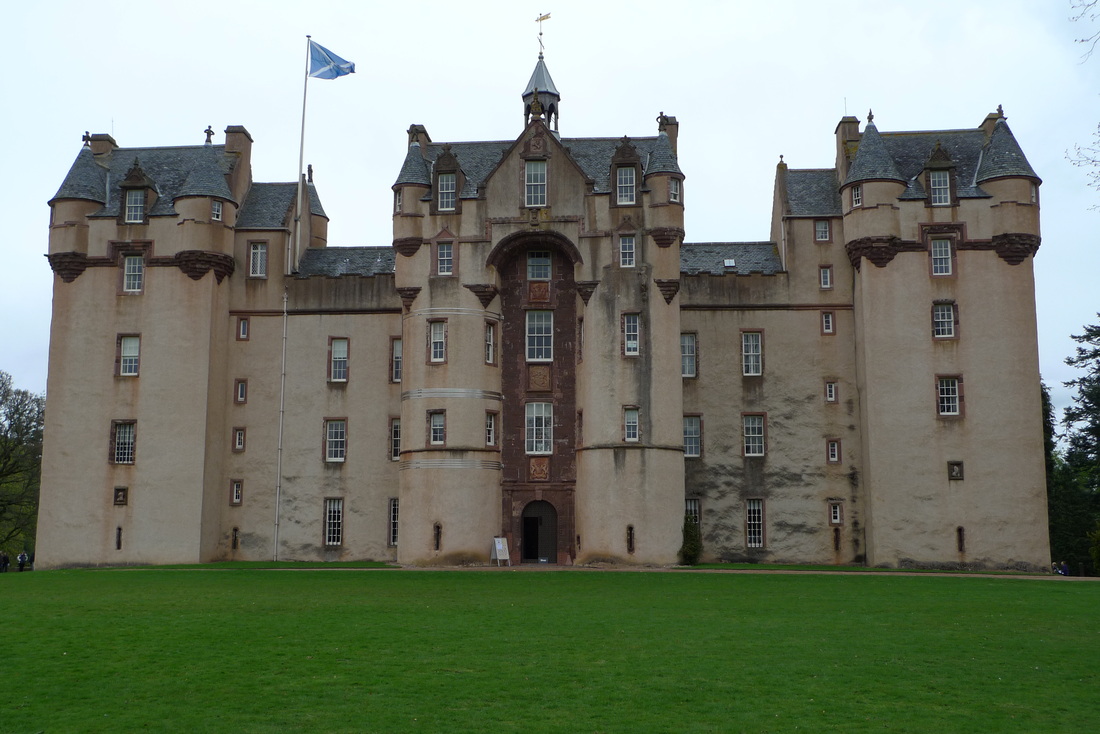 Fyvie Castle
Fyvie castle has one of those jaw dropping driveway approaches. The gravel crunched like a breakfast cereal under my tyres and I felt somewhat silly and tiny arriving at such a grand place on a bicycle. It didn’t feel right in anything less than a Rolls Royce. When the driveway finally reached its conclusion I could not help saying “that’s amazing” even though there was nobody to listen. This is the castle we have all dreamt of living in, festooned with turrets and towers and crammed with fine art, antique furniture and tapestries.

That warm and dry billiard room had some interesting books on display that told of the motivations of the people who lived here. There was “History and theory of money,” “Past and Present Facts about Money in the United States” and “Poultry keeping on money-making lines”. The staircase is so wide that the Gordons had rode up it on a horse for a dinner party bet and the butler’s pantry has a wooden sink to prevent the brakeage of precious china.
Fyvie is the midway point on this route and I returned to Ellon on different roads to gives some variety to the journey. This is not the most dramatic part of Scotland, it is not where the mountains are, but the farming landscapes are pleasant, even in the rain.

I thought about how little rain bothers me when I am on my bike. It would be the total opposite if I was heading to work. I would worry about getting my clothes and hair wet, but on my bike I don’t care. It adds to the adventure and feels more rewarding to have travelled in poor weather to reach a destination.

“…he is the man in public life of all others whom I have loved... I say emphatically, loved ”. William Gladstone speaking about the 4th Earl of Aberdeen

The 4th Earl of Aberdeen certainly made an impression on people. He is said to be Queen Victoria’s favourite Prime Minister. He was also popular with his tenants who raised money to build a monument to him, which was my next stop.  Who nowadays would build something to honour their landlord?

The Earl cared about the condition of his tenants and improved the estate with new buildings, tree planting and draining. The plaque on the monument states that it was built by “grateful tennantry”

I loved the name of this structure- Prop of Ythsie. It did not exactly roll of the tongue so I could not remember what it was called when I had to ask for directions. “Is this the right way to the folly thing?” 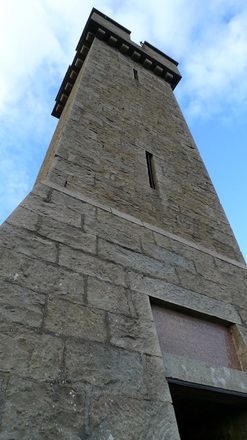 Prop of Ythsie
Luckily the man in his garden knew what I meant and gave me very precise directions. “Take the muddy track at the side of the field. Through the gate and keep going. ”

This was the hilliest part of the entire day. It was deceptive country because there were no obvious hills, but the Earl’s tenants had managed to find one of the highest spots in the area to build their monument.

The sludgy path slowed my peddle rate to a crawl and it was a relief to finally reach the door of the Prop, but I still had the spiral staircase inside to tackle. It looked like a castle tower, sitting alone as if severed from the rest of the castle. It was very dark inside with occasional tiny window slits to let in light and blustering wind.

When I got to the top gusts blew my hair well out of place. Perfectly manicured farmland undulates towards the line of hills called Bennachie. My eyes were drawn to the peak of Oxen Craig which had the only snatch of light above it when huge black clouds were blocking out every other bit of sunshine.

Continue to part three of this route: Picardy Stone
View Ellon to Fyvie cycle in a larger map
Getting there
There is no rail link to Ellon, but you can cycle here along the Formartine and Buchan Way from Dyce station (14 miles). My guide, riding the rails, details this route.

Cycling distances and terrain
This is a 36 mile round trip. This does not include the 1.3 mile cycle from Fyvie village to Fyvie Castle. If you visit Gight castle this requires a couple of miles walking to reach from the road.

The Prop of Ythsie requires a 1.2 mile cycling diversion and then a 20 to 30 minute walk across fields to reach

Things to see and do
Fyvie Castle has an extensive art collection, including works by Raeburn. There is a tearoom which is great for a halfway refreshment break. There is an admission charge.

​Gight Castle is free to visit, but is surrounded by fence for safety reasons. You can get close enough for photos and the surrounding woods are pleasant for walking if you fancy a break from the saddle.

Where to stay and eat
New Inn Hotel in Ellon is a white-washed coaching inn with modern interiors. There is a good value restaurant.