"As the brown Buchan landscape rolled by, my thoughts went back to the days of shiny green engines, smart coaches and passengers, of housewives, fishworkers, schoolchildren and tourists- the palmy days of yesteryear." From an article titled Last Trains in The Story and Tales of the Buchan Line.

I stopped by a tiny ruin that looked like a garden shed. It was surrounded by farming country and not much else. This must have been a shelter for workers who had maintained the Formartine and Buchan railway line, which was shut down in 1979. It had a chimney and through the broken window I could see the fireplace. The dilapidated door looked like it had been kicked-in long ago so I ventured inside. Most of the floorboards were collapsed.

In the fireplace I found a tiny fragment of china. I imagined it being part of a tea cup emblazoned with the Great North of Scotland Railway crest. I pictured a flat-capped worker taking a final sip out of the cup as the last ever train rolls by on the day the line closes forever. He carefully rests it on the ledge of the fire before locking the door one last time and making his way home to an uncertain future.

The former railway line is now a cycle way in Aberdeenshire that links Dyce with Peterhead and Fraserburgh. I found it a poignant place because of the abandoned buildings, overgrown platforms and closed stations that once linked communities and were tended by a proud workforce.

This was the noisiest beginning to a cycling trip I had ever experienced. Helicopters taking off, landing and hovering. Dyce station serves Aberdeen airport and these copters are the lifeblood of the North Sea oil industry, transporting people and supplies out to the oil rigs. It was a good five miles of cycling before I no longer felt like I was riding under a flight path.

This was also one of the least scenic beginnings to a cycling trip. Dyce station has no cute stone cottage with flower boxes, but a couple of bus-type shelters. The start of the route feels insignificant at the backend of the car park, almost obscured by a Volvo estate. It is a tarmac path that passes office complexes and service yards that owe their existence to the oil industry. 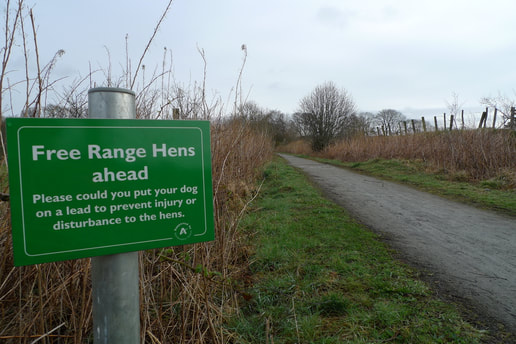 The disused Formartin and Buchan railway is popular with hens, dogs and cyclists
Very soon the route became green. A sign warns dog owners to use a leash near a farm where hens like to wander on the path. There were goldfinches that seemed to be in a constant rush, barely stopping long enough for me to catch sight of their flash of yellow wing. Elegant horses dropped their heads to chew on dewy grass. I tried my best to avoid the many black slugs taking ages to cross the path.

“Good morning,” an out of breath jogger smiled at me. This is a friendly place with every runner, walker and dog walker calling out a greeting of some kind.

It was easy cycling where all I had to do was keep peddling. Disused railway lines are great news for cyclists. There was nothing to concentrate on, no traffic to worry about, and no navigation skills to call upon.
The surface of the path varied greatly from smooth tarmac to light gravel and everything in between. The muddy sections splattered my face and clothes.  The worst terrain was the chunky gravel that resulted in slow, very bumpy travelling.

“Oh my goodness”, an elderly woman had difficulty restraining a feisty  Jack Russell. He was showing his teeth and straining on his leash to get at me. I decided this was not the best place to stop and take a photo of a railway crossing gate. I made my escape, noticing that the redness of the big no-entry symbol on the gate was completely faded.

I began to imagine sitting on a train and travelling this route, not difficult to do because it still feels like a railway line. I crossed numerous little iron bridges, passed through plenty of sturdy tunnels and most impressive of all, rode over the River Ythan on the four arch viaduct into Ellon. This viaduct had taken two attempts to get right, with the first version collapsing in 1860, barely a year after opening. Luckily this happened before trains started running on the line! 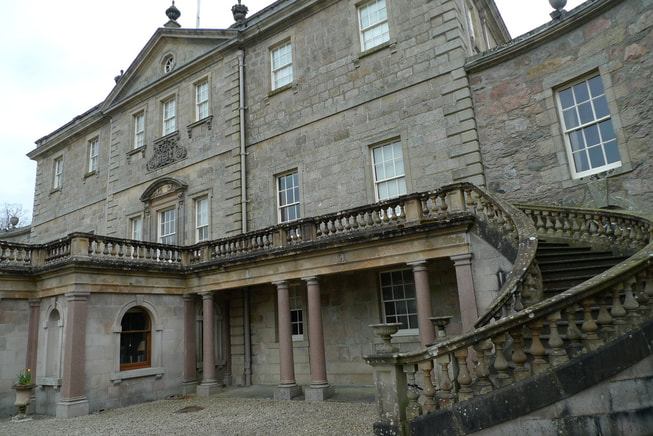 Ellon’s narrow roads seemed overwhelmed by the constant comings and goings. There was rarely a gap in the traffic. It was not a place for a cyclist to linger so I took off on the B9005 to reach the eighteenth century Haddo House, the former home of the Earls of Aberdeen.

You know you have hit the big time when the driveway of your house is one and a half miles long. This was a cycle to savour and I proceeded at a pace as stately as an Earl’s carriage. There are woods, a large lake and daffodils galore.
The Georgian mansion came into view and effortlessly succeeded in doing what it was designed to do- impress. Naturally, Scotland’s most renowned architect of the time, William Adam had been chosen to build this house. The interior is full of rich paintings, a chapel and even a taxidermy room.

My tour guide Alan told me about the effort involved when Queen Victoria stayed for one night in 1857. A bed was especially built for her, but she did not like the room that the bed was in. She chose a different room and the servants had to take apart the bed, move it to the other room and put it back together again.

The Queen brought a gift to mark her stay- a marble bust. Alan joked “Nowadays most people bring flowers when they are invited to stay, but Queen Victoria brought a bust of herself.”

I do not think it is possible to ever taste a better fish supper than the one I had at the Ashvale in Ellon. For once, the accolades and awards printed on the takeaway box turned out to be true. The Ashvale does it very well. The batter was light and crispy and the fish inside was so fresh that it was melt-in-the mouth.

They have an interesting challenge called The Ashvale Whale. This is a 1lb haddock fillet and if you can finish it you get a free dessert and a certificate!

Now I was satisfied for the evening, but what about my bike? It was parked up for the night in the boiler room of the New Inn Hotel. I always have a bit of a worry when I check-in to a hotel- what if they do not have anywhere safe to keep my bike? In this case the boiler room was the perfect place.

Continue to part two of this route: Two Castles
View Dyce, Ellon, Haddo in a larger map
Getting there
Dyce is a 10 minute train journey from Aberdeen. Aberdeen can be reached by train from Edinburgh in around 2 hours 20 minutes. From London journey time to Aberdeen is around 7 to 8 hours.

The cycle route begins at the back of the car park in Dyce station.

Cycling distances and terrain
Dyce to Ellon on the Formartine and Buchan Way is around 14 miles. This is a car-free route and perfect for new cyclists. The route is flat with some bumpy and muddy (in poor weather) sections.

It is 7.5 miles from Ellon to Haddo House, so a 15 mile round trip if you base yourself in Ellon. This is on the B9005, which is fairly quiet and has some minor hills.

Things to see and do
The Formartine and Buchan Way has information panels at most of the former train stations that give the history of the railway and information about wildlife.

Haddo House can be visited only on a guided tour, but is free to visit the grounds. There is a tearoom in the stables.

Where to stay and eat
New Inn Hotel in Ellon is a white-washed coaching inn with modern interiors and good value restaurant.