Cycling to The Picardy Stone

imagined myself as an express train, steaming from Ellon to Dyce on the Formartine and Buchan railway. I peddled faster and faster, the gravel crunched and crunched under my tyres. I know it wasn’t quite the clickety clack sound of train tracks, but my imagination was fired by the tunnels, telegraph poles and embankments. I roared by the five stations on the route: Esslemont, Logierieve, Udny, New Machar and Parkhil. Udny is the most impressive with platforms running along both sides of the path that looked like they could easily be put back into operation.

There was no need to make any stops because I had come this way two days ago. Going back the same way means seeing nothing new, but it does mean I can go fast. I reached Dyce in 1 hour and 30 minutes. I thought that was pretty good considering that the 1863 timetable had steam locomotives doing the trip in 48 minutes.

At railway stations I love reading the timetables to see where else the train goes apart from home. Two stops down the line from Dyce is the small town of Insch from where there are minor roads that lead to a 1,500 year old Pictish standing stone. I could not resist this little diversion.

Gaining an Insch
​
I had no idea what to expect from Insch. I regarded it only as a place to launch one last cycle into the surrounding countryside. I certainly did not expect to find a train station that I immediately fell for. 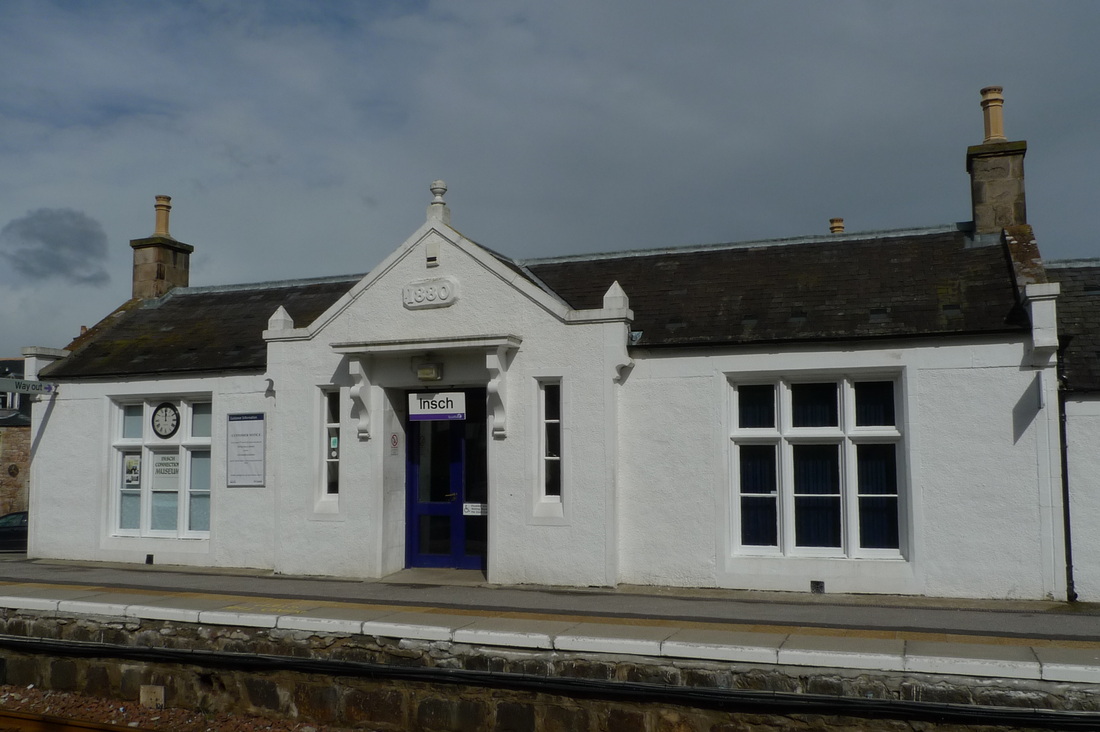 Insch train station
The waiting room is in a white painted stone cottage. It has chimneys and “1880” stamped onto an elaborate pediment above the door. The old fashioned station clock has Roman numerals and the name of a long disappeared company, “P. Wilson & Son. Keith.” Inside all that I could hear was bleating sheep from the field right next to platform one.

The view down the track is of a hill with a ruined tower on the top. This is Dunnideer Castle and is thought to be one of the earliest castles in Scotland. Opposite the station there is something that most people will not be bothered about, but it will have railway enthusiasts in raptures- an abandoned Intercity train carriage in British Rail livery

Insch town centre appeared to be well served with local shops that included a DIY store, butcher and craft shop.  I went into J.G. Ross bakers to pick up some lunch for the road ahead. A wax jacket clad customer was buying three sausage rolls and telling the staff that she was putting in 700 fence posts on her farm, “Everything is going to be sore tomorrow. I can feel it coming on- arms, back, legs.”
The rich farming countryside appeared almost as soon as I left town via Market Street. Ahead is the Hill of Foundland, a relative baby at 466 meters, but looking impressive in a part of Scotland not blessed with mountains.


“My day begins at 7.30am, unless it is lambing or harvest time. After breakfast I go out and discuss the weather and then the kind of work that can be done with our farm worker. I then check the sheep to make sure that all is well and that none of them has landed on it's back.” An Insch farmer’s day from BBC Domesday project

Then the road became wonderful- an avenue of beech trees. It felt like I was in a dream because I did not think that such perfect tree-lined roads existed in real life. They had sleek grey trunks where branches sprouted upwards in twists and turns. At the top where the branches became thinner they reached out to intertwine with neighbouring trees and made the road feel like a tunnel. Beech trees can grow up to 40m tall and these ones are probably very close to that.

I slowed right down to make this road last as long as possible. I loved every minute and it now sticks in my mind as one of my favourite roads in Scotland to ride a bike on. 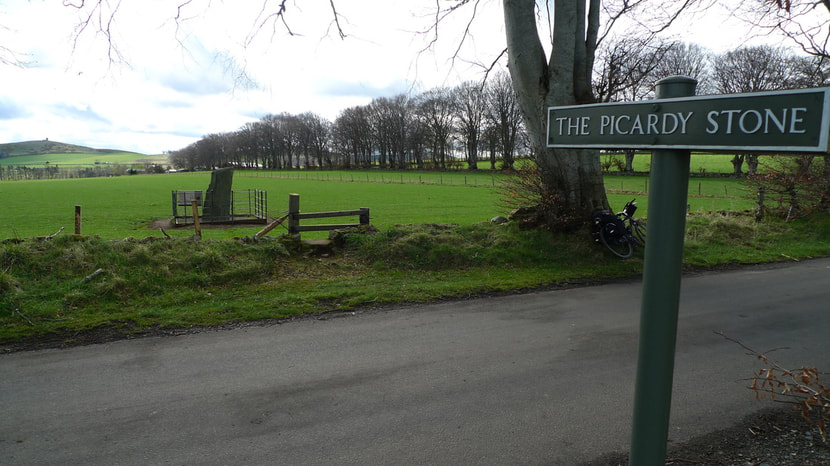 The Picardy Stone is located in a field
I spotted a small sign on the right hand side that pointed to the Picardy Stone. It was in a field with a fence to protect it from wandering livestock. This was not somewhere that could deal with mass tourism as there is barely space for one car to park.

I rested my bike against one of those sturdy beech trunks and crossed the stile into the field. The stone marks a place of burial and there is a double-disc and a “Z” shape carved into it. One theory is that this symbol could identify a particular family, but the truth is that nobody knows the real meaning. I expected something like this to be behind glass in a city museum to protect the delicate carving, but I could walk right up to it and get close enough to see how the symbols look in the natural light.

Far too soon the beech avenues ended and I looked for somewhere that I could stop and have my lunch. I spotted a pine forest and ventured inside until I found a clearing. I set out my picnic rug (my high-vis jacket) and enjoyed the peace for half an hour. It was a perfect spot to have a tuna sandwich and a rum truffle from the Insch bakery.

From this point I headed back to Insch on a different road that took me close to the ruined castle I had seen from the station. I spotted the moss covered sign marking the 1km walk to Dunnideer Castle. It might have been a short walk, but it was all uphill. There is not much left of the structure, apart from one wall of the tower with a great arched window. 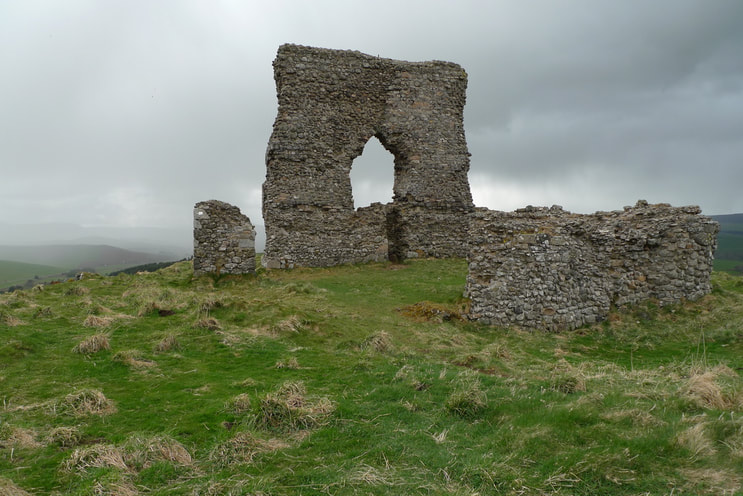 Dunideer Castle remains
Black clouds suddenly appeared and both myself and the craggy tower got battered by wind and sleet. There is no doubt I came off worse than a castle that must have had its fair share of storms since being built in 1260. This type of weather brings a certain drama to ruined castles and I think they look better with foreboding clouds swirling all around.

As this is Scotland the weather changed within minutes. The clouds parted and I could see how perfect this place was for a castle. It is the highest spot by far and gives unobstructed views for miles for the worthies who lived here. On the flipside anyone down below would probably feel intimidated by this structure that completely dominates the surrouding countryside.

On the way back down the hill I was busy watching where I was putting my feet and almost missed the elegant rainbow stretched across the fields.
This was the first time I had looked down on a rainbow from height and seen one so complete without any gaps. It stayed there for ages without breaking up and I wished there were other people around so that I could excitedly gesticulate, “Look at the rainbow!”I watched a car speedily make its way towards Insch and wondered if they even noticed the spectacle. Perhaps I was the only person who was seeing it in its full magnificence.

I had some spare time before my train home and stopped at Benny’s Café in the Benachie leisure centre. Over a very welcome cappuccino I reflected on my day. I hadn’t expected much from this very short cycle, but I ended up discovering a road that should be on every cyclists wish list. On my way out I picked up a Benny’s Café loyalty card. I fully expected to be back again to ride alongside the beech trees.
View Picardy Stone in a larger map
Getting there
Insch is a about 30 minutes from Aberdeen by train. Aberdeen can be reached by train from Edinburgh in around 2 hours 20 minutes. From London journey time to Aberdeen is around 7 to 8 hours.

Cycling distances and terrain
This is a circular route of only 7 miles and can be covered quickly if no stops are made. However, it is worth slowing right down to appreciate the beech-lined roads, truly one of Scotland's cycling gems. There are some climbs, but they are reasonably gentle. These are very quiet roads, far away from significant traffic.

Things to see and do
The Picardy Stone is in a field alongside the beech-lined road.

The ruins to Dunnideer Castle can be accessed by a 1km uphill footpath. The path is marked by a sign alongside the road about 1.8 miles from Insch.

Where to stay and eat
This cycle was done as part of a longer three day journey where I based myself in Ellon. As this is such a short cycle it could be done as a day out from Aberdeen or even Edinburgh or Glasgow.

Benny's Cafe in the leisure centre is a good spot for cappuccino's and lattes. This route is ideal for a picnic lunch from products purchased at Insch's bakery. You can find a seat next to one of the mighty beech trees.