I had dreamed of this moment for so long. My first sight of the Standing Stones of Callanish on the Isle of Lewis. I imagined walking through farmlands. Suddenly the stones are visible on the horizon, looking like a group of people gathering for some event. As I get closer I am surprised at how many stones there are and that they are arranged in a perfect circle. I am totally alone with them.  I walk among them, feeling their roughness and ancientness on my palms. I stare at them and am stunned that people from 4000 years ago managed to arrange 5 tonne stones so neatly and deliberately.

Evocative images of these stones on postcards, calenders and fridge magnets would not leave my mind. They drew me in and I needed to be there for myself. I needed to experience what it is like to stand among one of Scotland’s most impressive monuments. First of all I had to get there...

“If there is one creature calculated to turn the gentlest human being into a reckless destroyer of natural life, I surmise it must be the Ross-shire Midge,” Alexander Kininmonth, engineer overseeing the failed Garve to Ullapool railway.

It was not the midge, but lack of funds that led to the collapse of this railway project in the 1890s. The effect of history meant that I was left with no choice but to end my rail journey at Garve and cycle the remaining 30 miles to Ullapool for the ferry to the Isle of Lewis.

The warmth of the sun on my back and the speed on this downhill were making this a fabulous ride. I spotted two other cyclists, seated on a check rug facing sparkling blue waters. They waved for me to join them. They had brie, baguettes and yoghurt and said “bonjour.” When they offered me a can of Irn-Bru the French illusion was over.

The couple from Brittany were heading the same way. They had also been inconvenienced by the failure of Alexander Auchmuty Seth Kininmonth ‘s railway to Ullapool. 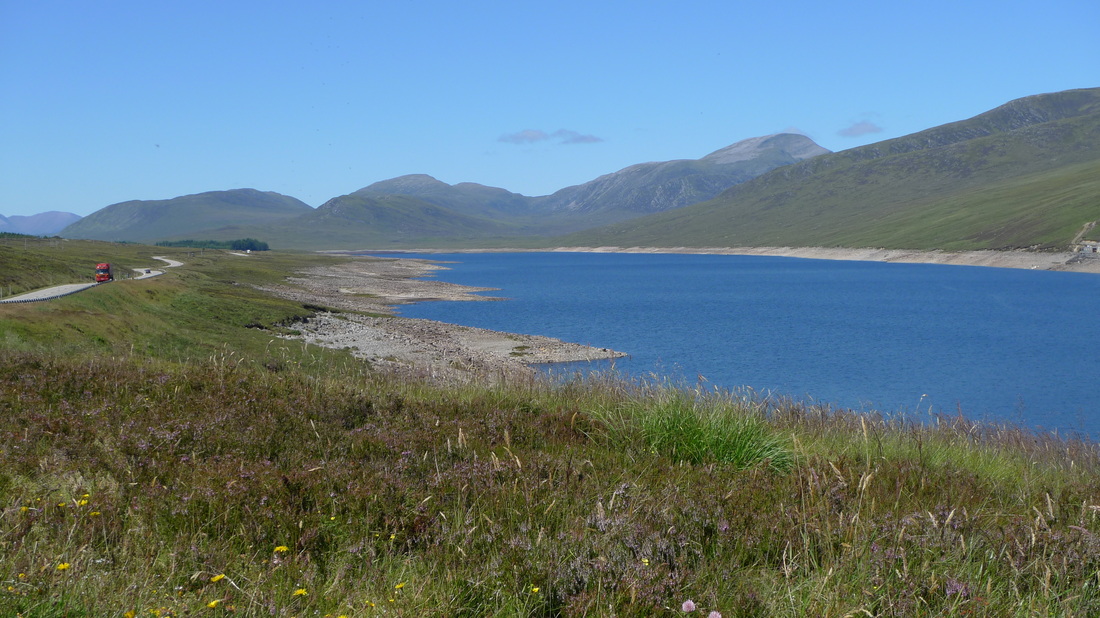 Loch Glascarnoch
We shared lunch on the shores of Loch Glascarnoch. I always assumed France to be the trendsetter when it came to cycling, but they said that Scotland had much better infrastructure. “Cycle touring in France is not very popular, “the man with the thin, perfectly groomed moustache told me. “So, there aren’t really many cycle lanes and paths. You have to fight the government to put them in. Cycle racing is more popular and big racing clubs go out together onto the road on Sundays. They don’t need cycle lanes.”

I pushed on and there was utter joy with the 12% down gradient near Braemar where I hit 31 miles per hour. One of my most memorable approaches into a village has to be the road along Loch Broom to Ullapool. The expanse of the Loch is on the left and the collection of white cottages and boats in the harbour starts to come into view during a racy descent.
"I hold that the aim and end of all ought not to be a mere bag of money, but something far higher and better.” Thomas Telford, engineer who designed Ullapool in 1788.

Ullapool in the sunshine.  Fishing boats painted blue, green and black were reflected in the gently rippling water. There were people promenading and licking ice creams or guarding fish and chips from jealous seagulls. There was a little beach with children skipping and then screaming when they felt how cold the water was.  Boat trips to the summer isles were being promoted from little huts on Shore Street.  Everyone stops to watch the Caledonian MacBrayne ferry arrive. Tourists with tickets are no doubt excited that they will soon be onboard exploring the decks and making their way to an island. For locals this boat is part of their routine. 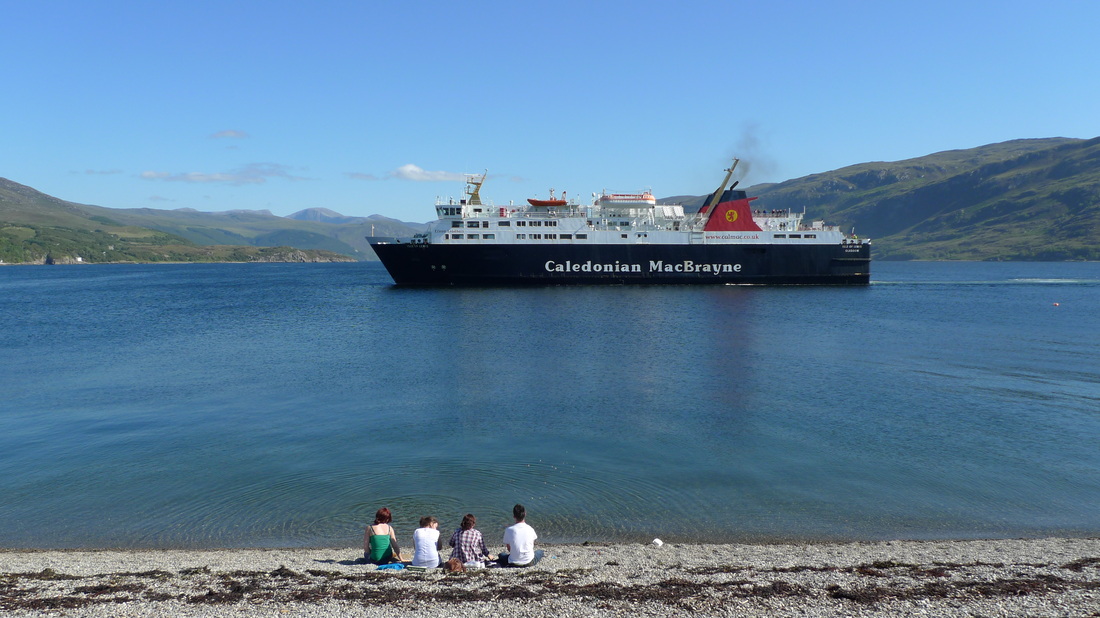 MV Isle of Lewis, the ferry to Stornoway
MV Isle of Lewis is the largest and fastest ship in the fleet. There are drinking and eating places, reclining seats and deck space to stroll. I passed the voyage with dinner in the Mariner’s Cafeteria with an un-nautical and un-Scottish meal of Thai green chicken curry followed by Belgian waffle with banoffee sauce. There is a school dinner atmosphere with people queuing, clutching their trays and staff spooning food onto plates. It is all very tasty and filling.

Almost three hours later of smooth sailing we tied up in Stornoway, a place that surprised me for not being a quaint island settlement. It is actually one of the largest towns in the Scottish Highlands with around 9000 residents. There was fast traffic, roundabouts and dual carriageways, making me feel like I was in a bigger city rather than on an island with open spaces and ancient monuments.
I soon reached Laxdale Holiday Park where I stayed in the bunkhouse. It is basic, comfortable and immaculately clean. There are 4 bunks per room, shared bathroom and kitchen. My roommate was an 85 year-old man called Donald. He walked with a stick and spoke very slowly, but had an adventurous spirit. “I travel a lot. I just head off when I feel like it. I am on my own now so can go where I want, when I want.”

Donald had not booked the hostel or planned anything for this trip, but just jumped in his car and drove here. He saw a poster for the bunk house on the ferry and wrote down the directions. “I don’t know how many nights I’ll stay for. I’ll just see how I feel and decide where to go next.” It was the type of freedom I would normally associate with the twenty-something gap year backpacker. I would not see him again, he only stayed tonight. I imagined him free styling and seeing where the road took him next.

I went to bed excited. The Callanish standing stones were a sleep away. I dreamt of that empty field, walking through the long grass to the stones guarding the horizon.

Continue to part two of this route: Callanish Standing Stones
View Garve to Ullapool in a larger map
Getting there
Garve is a 50 minute train journey from Inverness. Inverness can be reached by train from Edinburgh in around 3 hours 30 minutes/4 hours. From London journey time to Inverness is around 8 hours 30 minutes.

Cycling distances and terrain
Garve to Ullapool is 31 miles.
The route is on the A835 where traffic is steady, but not too busy. It is mostly a good road with plenty of opportunities for vehicles to pass safely. It is not a flat road and there are hills to get up.

Things to see and do
Corrieshalloch Gorge is at Braemore, 11 miles from Ullapool. There is a walk to a suspension bridge that is 200ft above the gorge.

Where to stay
Laxdale Holiday Park has a bunkhouse with basic, clean, shared rooms. They also have a kitchen for the use of guests. From £14.50 for a bunk. It is located 1.5 miles from Stornoway.