"You have to feel the walnut on the walls. It feels like silk." Mary, the guide at Mount Stuart, encouraged my tour group to appreciate the finer details in the house. I put my hand on the surface and moved it upwards. She was absolutely right; I had the sensation of silk against my palm.

Mount Stuart, on the Isle of Bute is, in my view, is the most breathtaking stately home in Scotland. It is the extent of the interior decoration that blew my mind. Mary was expert at drawing our attention to this.

The lunchtime ferry brought me to Rothesay, the main town on the Isle of Bute. Arriving passengers created a buzz about the place, but I found myself the only person visiting Rothesay Castle. This is a classic-looking fortress- like the sandcastles you made as a child- with a water-filled moat and a drawbridge. It is the only castle in Scotland to have a circular wall surrounding it and it has a Norwegian connection.

Bute had been ruled by the Norse until it was captured by the Scots in the mid-1100s, with the castle being constructed in the early 1200s to defend the island. The Norwegians did not give up so easily and arrived on a fleet of 80 ships to hack away at the castle with axes. Despite having boiling tar poured on them from the defenders they managed to capture the castle, but a much larger Scottish force arrived and kicked them out.

Much of the castle is a ruin, although there is an impressive Great Hall with roof beams, chandelier and enormous fireplace. I found a pit prison, which is a common enough sight in castles, but this one was open so that I was able to climb down the ladder and go inside.  Seagulls were all over the castle's moat. It was nesting season and a pair of birds guarding an egg sqwaked at me when I came too close.

I was fascinated by how the town had grown around the castle, so that it was hemmed in by modern buildings. Just beyond its walls old men smoked outside a pub and there were people going in and out of the job centre. It was unusual to find a castle so close to the trappings of the present day; the expectation being that they are in remote locations that allow your imagination to drift into the distant past.

I bought an ice cream and walked along the promenade, a must-do activity in a seaside town.  I loved the immaculate lawns at the Winter Gardens with their bright flowers. Even though I didn't need the toilet I still paid to go inside

The interior is magnificient with walls entirely clad in decorative ceramic tiles, ornately patterned in rows. The floors are designed with ceramic mosaic, with the crest of the Royal Burgh of Rothesay at the entance. Fourteen urinals stand like sentinels along two walls, another six surround a central stand - each a white enamel alcove topped with the legend "Twyfords Ltd. Cliffe Vale Potteries, Hanley" and crowned with imitation dark green St Anne marble.
Three glass sided cisterns feed water to the the urinals through shining copper pipes. Nine WC cubicles with plain panelled doors complete layout. Apart from the cisterns in the cubicles all the original fitments remain as supplied in 1899 by Twyfords Ltd. Glasgow for £530. 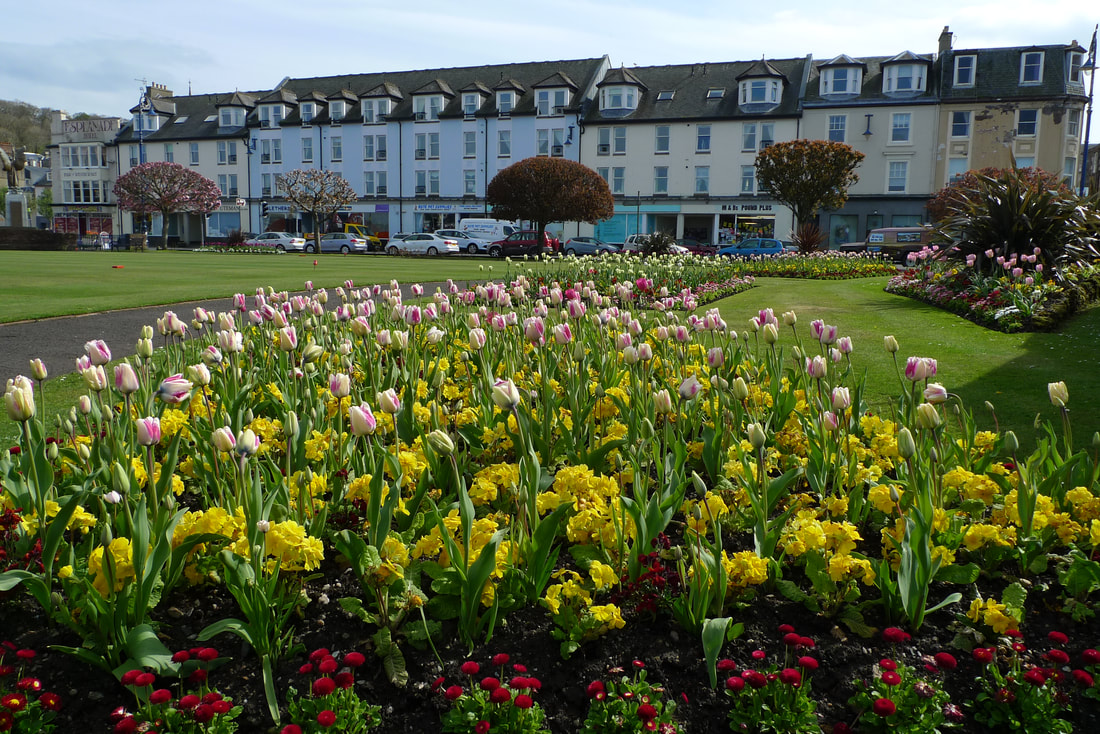