It is the only place for a cup of tea for miles around. It is a speck of whitewashed human existence in an epic landscape of green moors and brown hills. It sits at the end of a bumpy gravel track. The neighbours are herds of red deer. Visitors are so rare that you might have to knock on the door to announce your arrival. The bar is warmed by a peat fire and there is a good selection of single malts. Welcome to Scotland's remotest hotel.

All of the doors that we tried were locked. Paul knocked on a window to get the attention of someone. Then we heard the door to the bar being unlocked. A woman motioned for us to come inside and said "we are that quiet I never even thought to open up."

As soon as we entered I commented on the wonderful lingering aroma of last night's peat fire.  “We burn it in the stove, " I was told. "We had it on last night. It was cold. Some people love it, some hate it.”

I said “I can’t believe anyone would not like it.” The smell of peat, whether in whisky or from warming up a cosy cottage is one of my favourites.

We took tea in a lounge that had deer antlers over the fireplace. There was a collection of magazines that told something of the clientele of The Garvault- ‘Shooting and Conservation, ‘Total Flyfishing’ and ‘Trout and Salmon’.  I had noticed a trout displayed above the bar with a plaque stating that it was caught in nearby Loch Rimsdale in 1990.

The tea tasted all the better because of the hours of cycling to reach this place and the knowledge that there is absolutely nowhere else around that can offer a hot drink in exchange for money. It was incredible to me that a hotel could exist out here; a landscape so devoid of humans that it made this little building look out of place and utterly insignificant.

Paul and I thought it was magical and plotted future visits with our partners, romantic wilderness getaways, however the owner shrugged off the novelty value of being crowned the most remote hotel in the UK, "Apparently the remotest hotel is defined by the longest distance to the next hotel, " As if to reassure us that people did stay here she quickly said, "Last week we had fishermen staying... but the waves on the loch were so choppy they didn't get to go out."

This is a landscape where the deer is king and the owner told us that she had hit one in her car yesterday. We had noticed the massive dent in the vehicle in the driveway. Despite living here for many years this was the first time this had happened to her. "The deer was fine, got up and walked away. I still reported it, just in case a bone got broken or something. They are the same colour as the Heather now, so very difficult to see- they just sort of appear." We learned that it is impossible to have a garden up here. "The deer come into the hotel grounds. That's why there are no flowers. They eat everything. The only thing they don't touch is the daffodils."​ 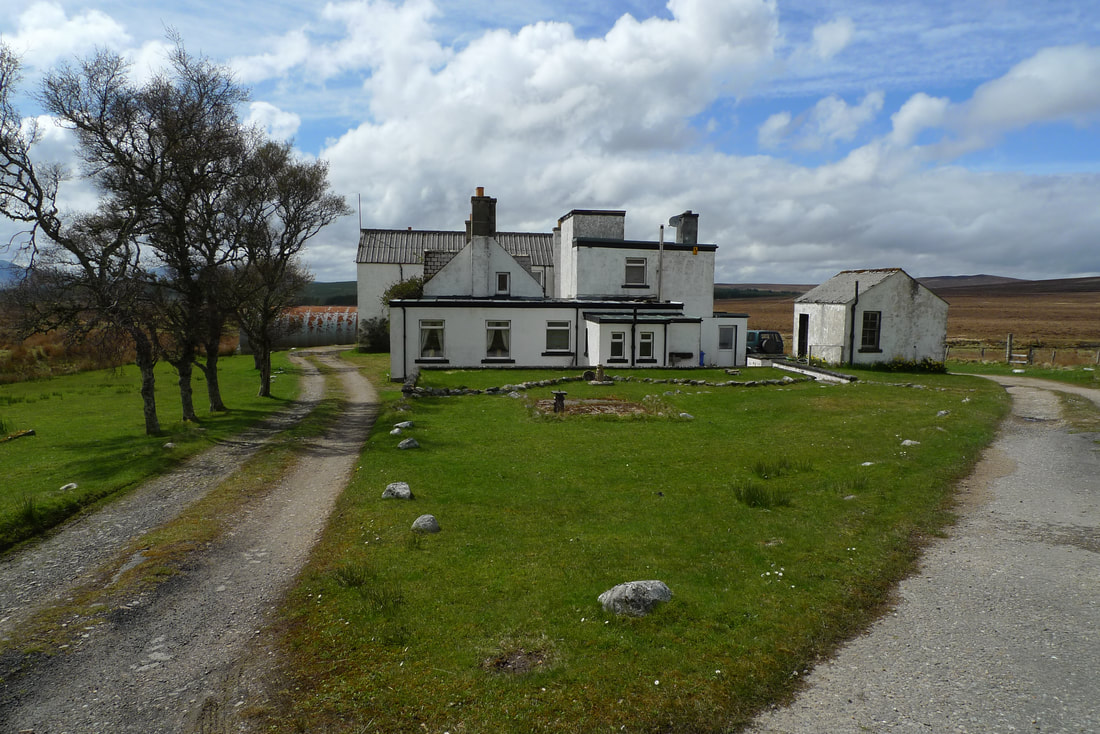 The Garvault Hotel
The Wilderness Train
​
​The Garvault Hotel was just one of many remote experiences on this cycle journey. It began with the Far North railway, a line that services some of the most out-of-the-way stations in Scotland, including our stop at Kildonan. It took 3 hours to get there from Inverness. On the way an elderly woman wearing a brown cardigan, brown skirt and floral print blouse got on at Lairg and asked for a "day return to Thurso." She was so prim with her hair tied back in a bun and putting on her reading glasses to do word searches.  The train skirted the coast on the approach to Helmsdale and I spotted three seals sitting on the beach. It was cloudy, but the sun was shining directly on one particular patch of sea way off in the distance.

It is a spectacular approach to Kildonan with the track following the curve of the River Helmsdale and a backdrop of hills and forest. We were the only passengers to get off which was unsurprising as this is the one of the least used stations in the UK. Once the train had left us the only sound was the river rushing under the nearby stone bridge. It was a revelation to us that a station could be this peaceful. There were no people, no loudspeaker announcements and no shops. A sign listed the limited facilities of the station that included 'a revolving gate to prevent access to sheep.'

I find there is something therapeutic about remote stations as they are such a counterpoint to their urban equivalents. We paced up and down the platform, loving the freedom of  having an entire railway station all to ourselves. We trailblazed through long grass and sheep droppings to take a closer look at a wooden shelter on a disused platform. Through a broken window we could see a wood burning stove and wondered when this was last used.
Loch Achnamoine

As soon as we started pedaling it became obvious that we had found an absolutely perfect place for a bike ride. Although this is designated as an A-road, the A897, it is single-track and virtually traffic-free, if the very occasional passing car can be called 'traffic'.

The road followed the River Helmsdale, its banks lush with forest, where we passed several people fishing. They were all dressed head-to-toe in immaculate Tweed. It was Tweed overload and looked like one of those adverts for country clothing that you get in magazines, particularly when I saw a woman in full garb, including a cap, striding by with a pair of Golden Retrievers.

The road leaves the river and the landscape takes on the character of sheep farms, moors, grassland and hills brown with Heather. At Kinbrace we turned left and passed a blue house with yellow window frames and logs stacked up in the garden. It looked like a dream Highland hideaway. There is another remote railway station here where we found a remarkable survivor from the days of steam trains-a set of scales with decorative iron work and embossed with a a coat of arms and 'Pooley and Son Ltd .' We wondered what sort of goods were once weighed at this secluded location.

Our route took us alongside Loch Achnamoine, its surface painted with cloud reflections. It had a beach so we stopped to walk down to it, on a squelching bog that made our feet wet. There is something magical about an inland loch having a beach. It is not what you expect; a beach is something you associate with the coastline.  Stepping from the grass onto the soft sand immediately felt special. Apart from two rowing boats resting on the beach and barely audible ripples on the surface there was nothing else here. We had it all to ourselves, so we spent a good few minutes walking the length of the tiny beach and just trying to absorb the overwhelming sense of tranquility. 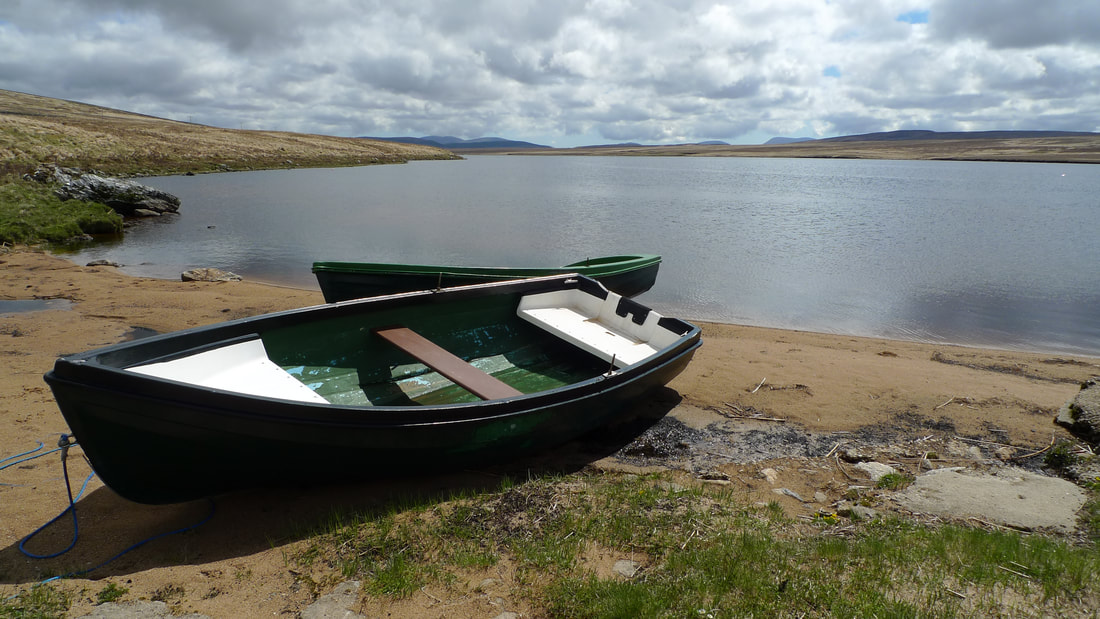 Later on we arrived at Loch Badanloch. This stood out because of the tiny island on it, covered in trees. I felt a desire to row out to it, to feel what it was like to stand on that minuscule island in this immense landscape. Then I got distracted by the herds of red deer. We tried to get closer to them, but they ran off. We stopped and they also stopped and stared at us. We tiptoed towards them and they scampered. I had never seen this many deer before. I had a strong sense of this being their land and we were mere visitors, passing through. On the horizon there were mountains topped with snow, the white blanket glowing in the sunshine and taking centre stage among the greens and browns of adjacent ridges. This was an epic show that we found ourselves in the middle of.

It was here that we discovered the only indication of traveller services in this area, the sign for the Garvault Hotel. This gave little away beyond it being 'open to non-residents.' And from the sign there was no visual of an actual hotel, we had to trust that there was one located at the end of the half-mile gravel track.  This was a landscape where human existence was swallowed up.
​
Even the reflective road safety posts on the B871 were almost covered up by clumps of furry moss. Stand still long enough and something will grow on you! Nature is very much in command here.

On the approach to Syre a notable change in the landscape occurs. From here to Bettyhill it becomes more lush with greener grass, trees, sheep farms, pretty cottages at regular intervals and the deep blue River Naver for company. It was a lot gentler and less intimidating compared to where we had been.

​Syre is one of my favourite churches in Scotland. It is the cutest building, made simply from corrugated iron, and looks like it belongs on a model railway. It has a red roof, white walls and black window frames. It was built in 1891 for the shepherds, gillies and gamekeepers of the area.  Going inside was a step back to the nineteenth century with rows of pine pews and gas lamps on the walls. All that we could hear was the occasional lamb crying. I could easily sit here for hours enjoying the serenity of this place. If I ever need to escape and be alone for a bit this place is top of the list. 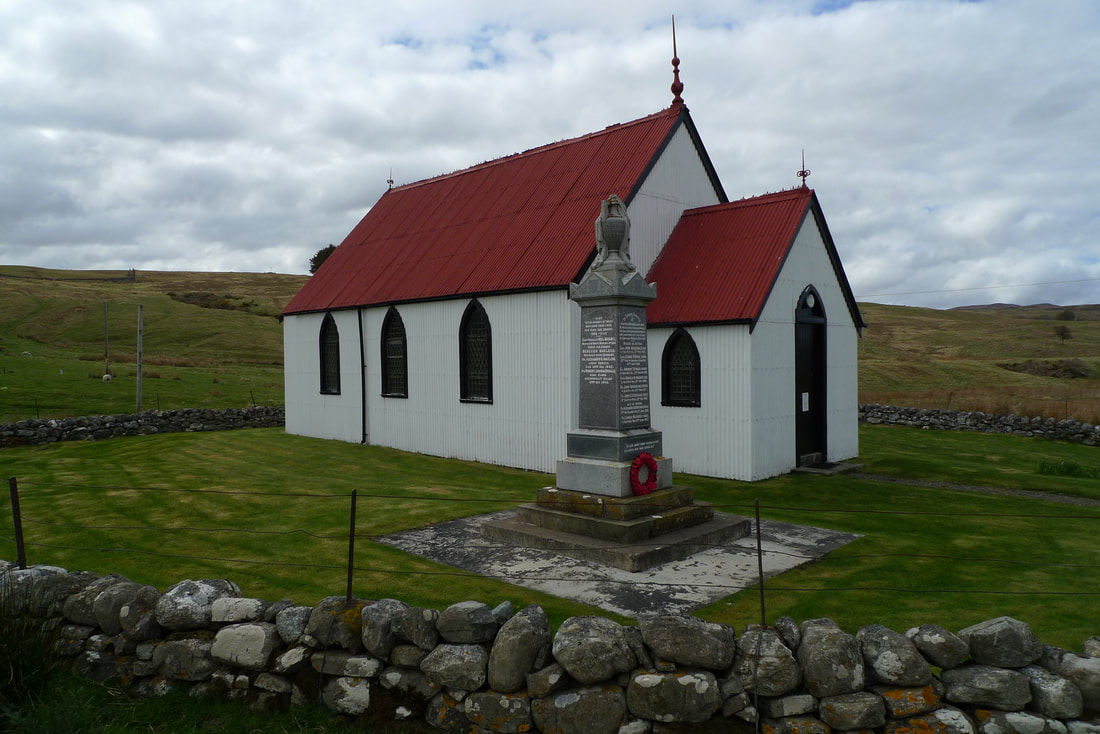 Syre Church
This area is called Strathnaver and is synonomous with the Highland Clearances- in the nineteenth century  thousands of people were forcibly removed from their homes by landlords who wanted to make way for profitable sheep farming. It resulted in a huge depopulation of these lands that has never recovered. One farm in this area once had 2000 people living and working there, but after the Clearances the farm employed just 19 shepherds.

Some of the people cleared from these lands ended up in Bettyhill. The village was created by the Countess of Sutherland to provide alternative employment,  where former crofters found themselves forced into making a living from fishing.

The approach into Bettyhill was the most perfect climax to this ride. All sorts of positive adjectives poured from my lips and I could not believe I had this view from my handlebars. It is an uphill climb that looks down on the River Naver at the point it flows out to sea. It is backed by a panorama of hills and down below there are swirling sand bars, turning golden from the sun breaking through the clouds.  It was all too much for me, all this beauty in one day, and there were tears in my eyes.

Read part two of this cycle route: Bettyhill to Durness
Getting there
The train from Inverness to Kildonan takes around 3 hours on the scenic Far North Line. Kildonan is a request stop which means you must tell the conductor that you wish to get off there otherwise the train will not stop at the station.

You need to book a bicycle space on these trains.
Where to stay and eat
I undertook this journey with my friend, Paul. Part two of this journey from Bettyhill to Durness can be read now