How can you possibly not want to live in a Scottish castle?

The first Duke of Buccleuch built Drumlanrig Castle, but he stayed just one night. He didn't like it, so moved out the next day. He must have been the fussiest person in the whole kingdom to turn down 120 sumptuous rooms, 17 turrets and 45 acres of gardens. To stay even one night here would be a dream come true for me. The closest I got was the one hour guided tour, the prize at the end of the train journey and cycle ride into deepest Dumfries and Galloway.

The castle is around 17 miles north of Dumfries with Sanquhar being the most convenient station to cycle from. The final destination of my train was Carlisle, England, which gave this journey a touch of the exotic, of heading far away, to the undiscovered land. It was odd to see Carlisle on the digital displays at the small, rural stations that we passed through. It seemed unlikely that this unassuming 2-car diesel train was a cross-border service, heading into another country. I felt that there should be more fanfare- there wasn't even a catering trolley.

​We rolled out of Glasgow Central where the iron railings on the platform were topped with blue painted thistles. We sped through built-up areas, including Anniesland that had 4 blocks of multi-storey flats, lined up like dominoes. Within 15 minutes we had entered the countryside with fields and farmhouses and a deer standing still, watching our little train.

At Sanquhar, once the train had made its noisy exit, the only sound was an eruption of birdsong. I was charmed by the station building, which has been converted into a self-catering cottage. A place to live out a fantasy life of a 1950s rural stationmaster.

Sanquhar has an interesting claim to fame; it has the world's oldest Post Office. It also has a stunning piece of architecture in the form of the Tolbooth. It was designed by one of Scotland's most renowned architects, William Adam, and when it was a jail it was famous for being easy to escape from. It was common for prisoners to make their exit at night to head home and then return to their cell in the morning! 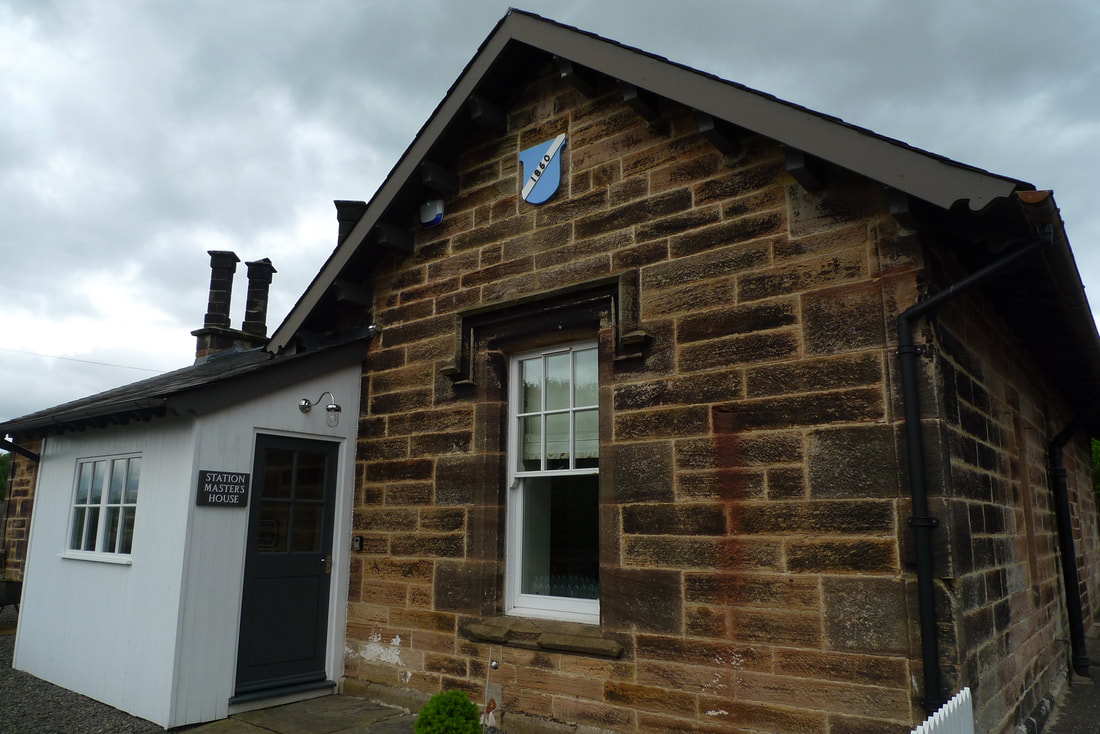 Sanquhar train station is a self-catering cottage
​Bicycle is the most apt form of transport to reach Drumlanrig because of a certain blacksmith who had worked at the castle. Kirkpatrick Macmillan is credited with producing pedals in 1840. He attached them to the dandy horse, the precursor to the bicycle that required riders to propel it forward by pushing their feet on the ground.  Macmillan's pedals drastically improved upon the design and The Kirkpatrick Macmillan cycle trail was created in recognition of this achievement. The route signage features a graphic of Macmillan's bicycle.

I used my pedals to take me passed the curling pond, a peaceful place of ducks and benches to watch the ducks from. A Border Collie ran alongside me for a few seconds, until called away by its owner. The town was soon a distant memory as I hit single-track country roads with stone walls.

This route was a total joy. This was my first cycling trip in Dumfries and Galloway and I was impressed.  In just 11 miles there was a huge variety of scenery, tranquility and almost no traffic.

I enjoyed meandering alongside the River Nith, which was fast flowing and rocky in sections. ​There was forest where bluebells flourished on the verges. A hare scampered out and gave me a fright. It bounded along in front of me before finding a gap in a hedge to make its escape.  Bumpy fields were populated with sheep and lambs getting up to mischief. I could not take my eyes from the hills on the horizon that were so different to anything I have seen in other parts of Scotland. They seemed to be sculpted to perfection with the grass so smooth, looking like that grass you get on model railways.  In this perfect sunlight the green was so intense. Lesson learned: you don't have to go north in Scotland to find hills to make your heart sing.​ 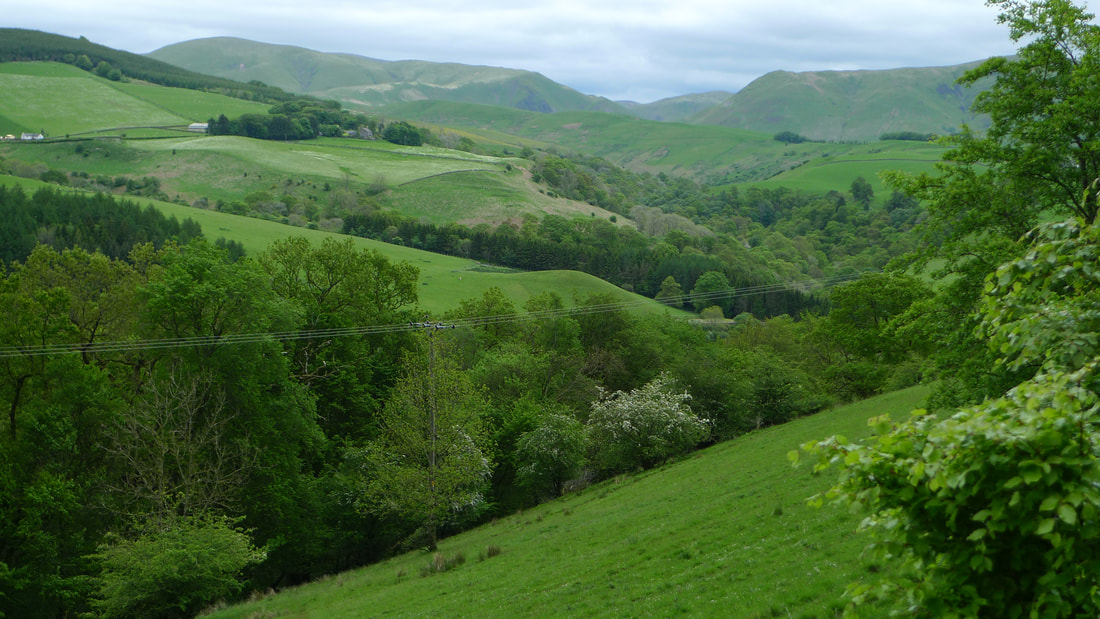 The hills on the horizon are lush with perfectly smooth grass
A long, straight, tree-lined avenue built excitement about just how grand Drumlanrig Castle was going to look. There it was, in the distance, its features getting clearer and clearer the more that I pedalled. Turrets, towers and lots of windows.  Then I was close enough to make out that this is a Renaissance masterpiece with flourishing stone carving.

Although Drumlanrig is called a castle it is much more like a stately home. It is filled with lavish furnishings and fine art, including one of Rembrandt's greatest works, Old Woman Reading. You would expect nothing less in the home of the second-largest private landowner in Europe (the Queen is first). The current Duke of Queensberry and Buccleuch and his family still use Drumlanrig and it has a lived-in feel, particulary the Morning Room where the sofas have indents from people sinking into them and there are coffee table books lying around .

In the Long Dining Room the guide pointed out a silver serving dish with a unicorn on one side, and a gfiffin on the other.  "I once pointed wrongly at the unicorn and called it a griffin to a tour group. I hadn't realised that the family had turned it around. You sometimes forget that this is their home and things get moved."

My favourite thing in the castle was a four-poster bed, not for how it looked but who had spent a night in it. The guide told us that "Bonnie Prince Charlie slept in this bed in 1745." She said it so matter-of-fact, but it made my jaw drop to be stood alongside such an artefact. Whats-more, the bed was later slept in by none other than Neil Armstrong, the first man on the moon. What are the chances? This must be one of the most unusual beds in the world, in terms of who has occupied it! 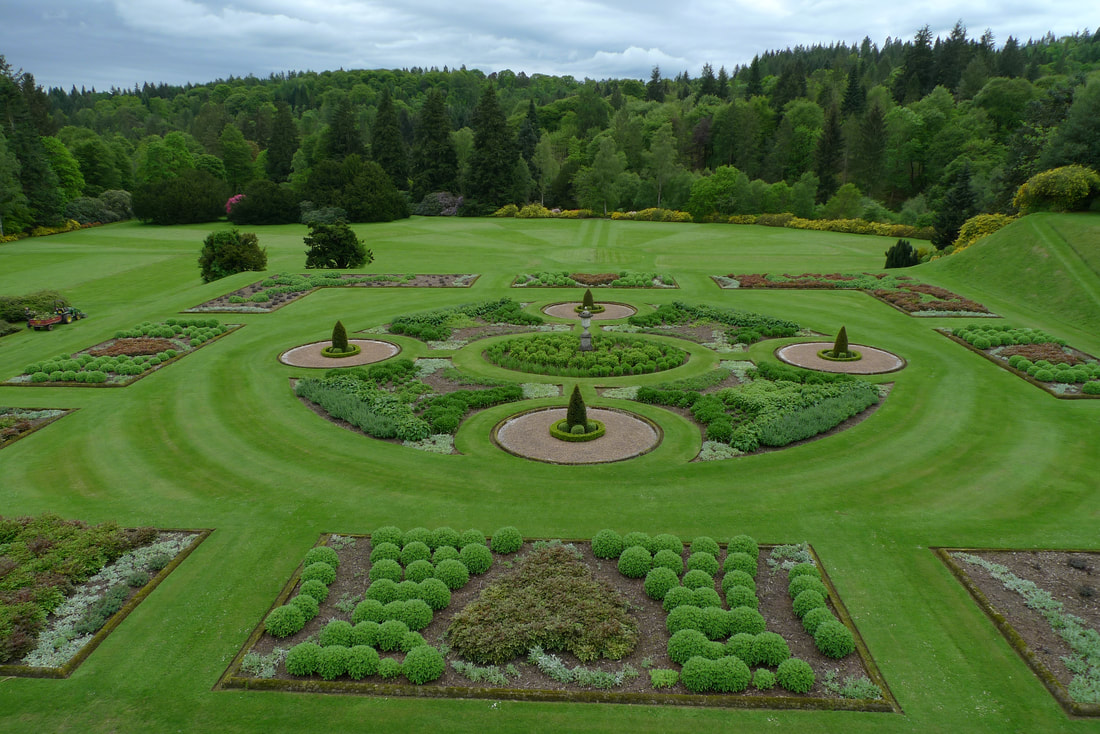 The gardens of Drumlanrig
For me the gardens are the star of Drumlanrig. I could wander them all day for the pleasure that they gave my eyes, ears and nose. The rhododendron produced the most wonderful smellscape. I adored the woodland walks on soft grass where bluebells thrived. The formal garden with its immaculate topiary arranged in perfect proportions was a work of art. I enjoyed the soundtrack of the trickling burn, bird chorus and children laughing in the adventure playground.

I discovered a Sycamore that is the largest in Britain and is over 300 years old.  I sat inside a summer house that smelt of moors and forests and marvelled at the geometric patterns of twigs on its ceiling and walls. Another summer house was made of Heather, with the roof and walls thatched with the dried shrub.

It was hard to leave Drumlanrig, but I had an adventure to embark on. I was searching for another castle, a few miles from here, somewhat challenging to find. Morton Castle is the antithesis of Drumlanrig- it is a ruin and gets few visitors. The lack of signage for this castle hides it away and ensures it remains one of Scotland's least known.

I headed down a narrow, minor road, wondering all the time if there really was going to be a castle at the end of this track. It was so quiet, not a sole to be seen. The longer this went on the more excited I got at what I would find. I could feel it was going to be special.

And it is special. The ruin is in a spectacular location, poised on a triangle of land that juts over a loch. There is a sweep of hills behind it; a true out of the way place. There were no people, no houses, just half a dozen sheep and lambs gathered outside the castle tower, staring at me. I imagined them saying 'how dare you come here and interrupt our peace?!' They scattered when I walked to the entrance.  There is not much to see inside the roofless shell, just crumbling walls and the remains of two towers.  However, it has the looks of a classic ruined castle, a dramatic atmosphere and plenty of mystery in that it is not known exactly when it was built and by whom.

I wondered if the fussy Duke would have like it here. The reason that he only stayed one night in Drumlanrig is thought to be that he took unwell and nobody came to help him. The house was so large that the servants did not hear his calls. He moved to Sanquhar Castle, a much smaller affair, so I think he would have liked Morton Castle. As grand and beautiful as Drumlanrig is there is something to be said for the simpler life. Just sitting here for a few moments, appreciating the total peace and quiet and looking out on sublime scenery was all that I needed.

Next: I cycle to Scotland's highest village. Read the next cycling journey 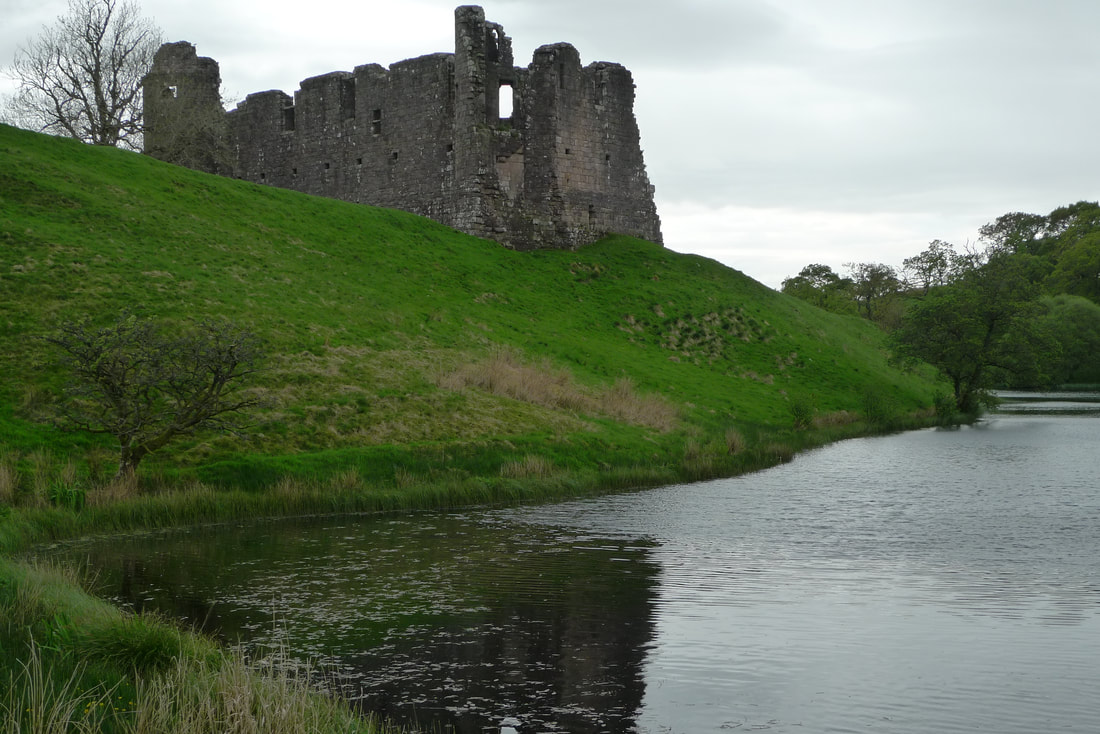 Morton Castle
Getting there
Take a train to Sanquhar. From Glasgow the journey time is 1 hour, 20 minutes.  Add another hour to the journey if you are taking a train from Edinburgh, and you must change trains at Glasgow.

Things to see and do
Drumlanrig Castle is open in the spring and summer and has an entry fee. If you do not want to do the guided tour of the castle you can buy a cheaper ticket that gives you access to the grounds only.  Morton Castle is free to visit and has no facilities.