Cycling to the Isle of Bute

Who needs a private speedboat and Lake Como when you have the Kilcreggan to Gourock ferry? For a few coins you get a 15 minute journey across sparkling blue waters, the spray of the sea in your face and the sun warming your back. There is a horizon of hills and distant islands and you depart from a peninsula dotted with grand villas. Yes, you could quite easily be in Southern Europe, but Kilcreggan is in West Scotland, not far from Glasgow. Could this be the most beautiful ferry crossing in Scotland?

I was on a quest to three of Scotland's 'most beautiful' experiences - a stately home, a railway station and, wait for it, public toilets (more about that later). However, I was finding that this journey was revealing many more beauties.  My trip began on a rail line that is often lauded as not just the most beautiful in Scotland, but in the world. At Glasgow Queen Street Station the train guard walked up to myself and the other waiting cyclists and announced that  "the 8.21 West Highland is now ready for boarding." That had never happened before; being personally introduced to a train service. Usually you just have to read the information boards and look out for the platform number being displayed. I suspected that the guard simply wanted to get the bikes on his train first, but I liked this touch. It created a sense of occasion that was deserving of such an iconic railway journey.

As the train pulled away there was an atmosphere of excitement as people looked forward to what they would be seeing from the windows. I felt that I was missing out because I would be getting off after just a few stops. Most people take this train to the end of the line, but few use it to get off at Garelochhead, where the scenic grandeur had barley begun. I did get to enjoy the views of the loch from the line's elevated position and as the train brushed by sections of forest I could see a mossy floor and lots of little streams.

At Garelochhead station the only sound was birdsong. I pushed my bike passed the deserted building and pondered if there was potential as a commuter village for those working in Glasgow. The journey time is only one hour and it would mean being able to live in an idyllic lochside location, but the infrequency of the trains probably makes it impractical. The other challenge that I noticed was the immensely steep hill to the station. Imagine having to walk up that every morning.

I made my way through the village, the only sign of life was a barking dog and some builder's unloading a van, and joined the B833 to Kilcreggan. It was steady with traffic, mostly in the opposite direction and I wondered if this activity was caused by the nearby Faslane naval base. It was also unremarkable, proceeding through forest, until the moment that the view opened up to the shoreline of the loch. The smell of the sea entered my nostrils and I spotted sandpipers, oystercatchers and other seabirds. 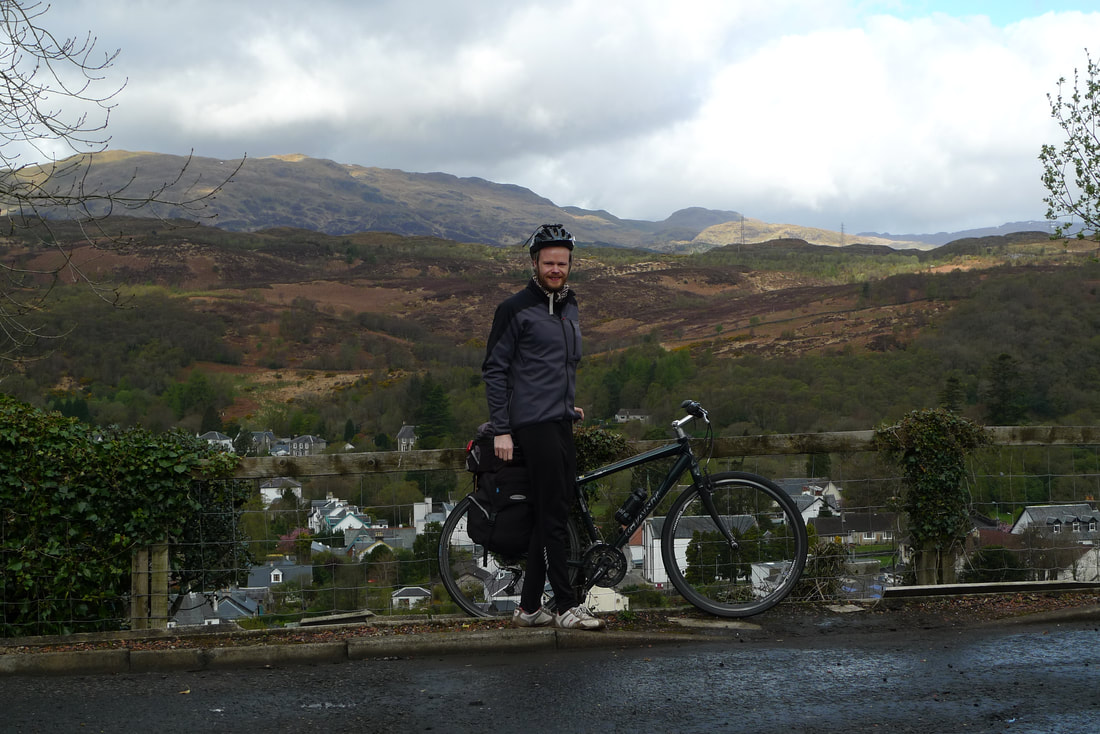 The view from Garelochhead train station
I pulled over and took a walk down to the rocky shoreline. It was littered with the remnants of shells; caused by the destructive eating of the sea birds. I found a crab claw among the shards. There was barely a ripple on the loch until a patrolling navaly dinghy passed by. The men onboard were watching me, and I presumed they were part of the security arrangements for the nuclear submarines that are stationed on the loch.

​Back on the bike and I noticed that this road has vintage iron signs that feature a hand with a finger pointing the way. After Rosneath the road turned inland and climbed sharply. It was a bit of a workout to get to the top and I was left out of breath. The reward was a nice descent into Kilcreggan. There was not much happening in the town. There is a grocery shop, cafe and bar. In its heyday this was where Glasgow's business elite had built their villas.  These homes are breathtaking, imposing, with many rooms and large gardens.

Many of the villas have towers; these had belonged to the shipping magnates so that they could keep an eye on their fleets. I cycled along to Cove where the mansions are even more impressive. I couldn't believe what I was seeing and that I had never known about this place before now. One huge house after another. I could look at these buildings all day and dream of owning one. Could this be another of Scotland's 'most beautiful'? The most beautiful collection of houses in Scotland.

Kilcreggan ferry terminal is a survivor from the time when this area was serviced by frequent paddle steamers. It has a long pier that ends at the most beautiful (I think a theme is developing) ferry shelter I have ever seen. It has windows, some with shutters, that reminded me of a cuckoo clock or a small chapel. The timber frames and window frames are painted blue and the roof is topped with a sign with 'KILCREGGAN' in white lettering. It has a tower that features black and white discs that had been used as a signalling system for steam boats. There were so many vessels, all competing for lucrative passenger traffic, that these signals were deployed to prevent collisions.

Another cyclist helped me to load my bike onto the ferry. He looked like he spent a lot of his life outdoors with his scraggly hair and tanned skin. I asked about his route and he said "I don't really have a plan. I might go to Bute, not sure. I'll have a look at my maps. Quite nice just to decide on the day." I liked the idea of making up a journey as you go.

Arriving at Gourock I followed the marked cycle route to Inverkip. This was mainly on a shared pavement and cycle path alongside the busy road. It was not the most pleasant cycling, with noisy traffic and frequent slowing down to safely pass pedestrians. Only the views of the sea and the opposite shoreline made up for this. I passed a lighthouse right alongside the road, painted immaculate bright white. This is the Cloch lighthouse, built in 1797.

The route diverted away from the road, along a bay. This was very busy with walkers and people having picnics. I kept going, but had this feeling that it might not be the right direction. I wondered if I was lost, but then I caught sight of the clock tower of Wemys Bay Station, the next place on my 'most beautiful' list.
Scotland's Most Beautiful Station

I have been to most of Scotland's railway stations and this is the bonniest of them all. Inside it feels more like the palm house of a botanical garden because of the extent and elegance of the glass canopy that covers the concourse. This  structure seems to shoot up from the floor, like a waterfall, and spread its tentacles far and wide. The tables of the café are a fine place to sit with a cappuccino and butterscotch cookie and enjoy this architectural wonder. I looked up at the glass and there was a perfect blue sky on the other side.

Inside the station bookshop there is a wood paneled waiting room where the walls are adorned with black and white photos of the station in its heyday, including a café with wicker chairs. There may no longer be wicker chairs, but this building still captures the essence of the early twentieth-century when thousands of Glaswegians flocked to Wemyss Bay to start their summer holiday on the Isle of Bute.

Today's ferry crossing to the island's main town, Rothesay, takes 35 minutes. I had lunch on the boat- split pea and bacon soup, which was a bargain and very tasty. I bought some Isle of Bute tablet for later then sat on the deck loving the de-stressing effect of cruising across calm waters with a vista of green hills and islands.  I always feel excited when taking a Caledonian MacBrayne ferry; thoughts of what lies ahead at my island destination. And this one was going to be extra special because I would get to see two more entries on my Scotland's most beautiful list.​​

Up next: cycling on Bute. Ready soon!
Getting there
Take a train to Garelochhead. From Glasgow the journey time is around 1 hour.  Add another hour to the journey if you are taking a train from Edinburgh, and you must change trains at Glasgow. In the summer, on Sundays, there is a direct train from Edinburgh to Oban that stops at Garelochhead. You have to have a bicycle reservation on these trains. Read my guide about how to make a bicycle reservation on the train.

An alternative option is to take a train to Helensburgh Central (45 minutes from Glasgow). Trains are more frequent and do not require a bicycle reservation. There is a 9 mile cycle route from Helensburgh to Garelochhead- read my blog about this route.

The route requires two ferry crossings: Kilcreggan to Gourock and then Wemyss Bay to Rothesay. Bicycles are carried free  and do not need to be booked in advance. You can access timetable information on the Caledonian MacBrayne website.

Cycling distances and terrain
It is about 15 miles from Garelochead to Wemyss Bay. The first half of the route is on a B-road from Garelochhead to Kilcreggan. The naval bases do result in a steady flow of traffic, but the further south that you progress on this road then the less traffic there will be. There is one memorable hill leaving the village of Rosenath. The second half of the route from Gourock to Wemyss Bay is mainly on a marked cycle route to Inverkip. It takes you on the pavement, alongside a busy A-road, with the exception of a section along the bay, just before Inverkip. For the last 3 miles from Inverkip I cycled on the pavement alongside the busy A78. There are no notable hills on this route.

Things to see and do
Where to stay and eat