Boating and Biking to Islay

It is one of the shortest sea crossings in Britain. It is so short that cattle were once swum across it on their way to market. Colintravie means “swimming strait” in Gaelic and there is only 400m of water separating it from Rhubodach on the Isle of Bute. On this warm day it certainly looked good enough to swim in.

At Rhubodach there were four cars waiting for the ferry, plus myself and Paul with our bicycles. A queue in this thinly populated part of Scotland.

Waiting for public transport to turn up is not generally considered one of life’s pleasures, but here it was delightful. The sky was blue with a few clouds looking as fluffy as the sheep in the nearby fields. The low green hills on the opposite shore promised new lands to be discovered. There wasn’t much in the way of noise, apart from the water gently lapping on the slipway and some chatter from passengers.

I heard a woman in one of the cars call-out, “Aww. I can’t remember the last time I saw a man smoking a pipe. I think it must have been my grandfather. He liked a pipe”

She was speaking to a man with a printed t-shirt sucking on a pipe. He looked like he was in a world of his own with his gaze fixed on the ferry that was fast approaching. He paused and answered casually, “I was a grandfather at 31, you know.”

I didn’t catch the end of the conversation because a man with a baseball cap pulled right down to his eyes had walked up to us. He looked our bikes up and down and spoke with a slow drawl, “the midges are bad. Really bad. Not great for cycling. Midges everywhere.”

Luckily MV Loch Dunvegan arrived and we were saved from further doom and gloom.  We wheeled our bikes onto the deck where the crew asked us to secure them in place with ropes. The timetable puts the journey at 5 minutes, but the boat has loads of seats in the passenger cabin. Why so many seats when there was barely time to actually sit down?  These must have the honour of being the least used seats of any public vehicle on the British Isles. 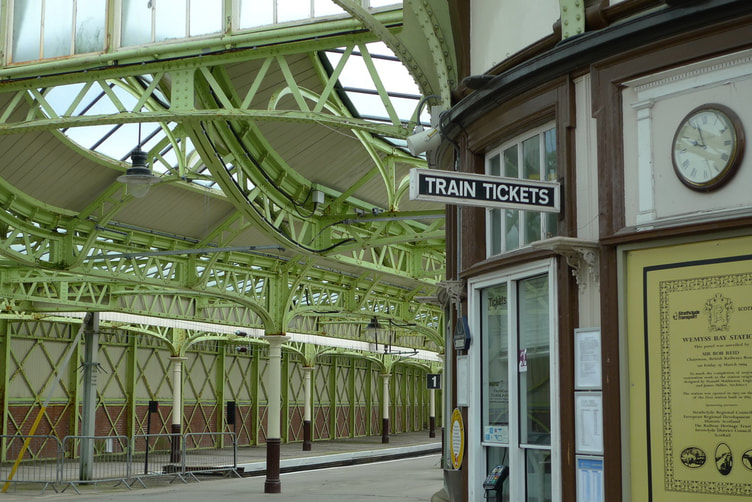 This was ferry number 2 of 4 that we took to reach Islay. This island is not the most straightforward place to reach because of the amount of water between it and mainland Scotland.  You can fly to New York in the same time it takes to drive to Islay from Edinburgh. We had set ourselves the challenge of reaching Islay in a single day using train, bicycle and ferry.

Our journey began on the classic seaside holiday train from Glasgow Central to Wemys Bay. This was the route that many thousands of Glaswegians once took to go “Doon the Watter”. Imagine it is 1903 and you are performing hard, physical work in a factory and you finally get away for your only holiday.  Arriving at Wemyss Bay station you must have thought you had walked into paradise.

You are amazed at the huge circular glass roof. It radiates upwards and outwards from the round ticket office. All this glass lets the light come flooding onto the colourful flower displays that grace the concourse. You probably feel like royalty as you make your way along the covered walkway to the ferry. It has wooden decking and wrought-iron archways that give the impression you are heading somewhere very grand.

The exterior of the building matches the sophistication of the interior. There is a Shakespearean quality to the gables with their half-timber framing. The sixty-foot clock tower almost seems unnecessary because everything else is so wonderful. Wemyss Bay is unlikely to be heard of outside of Scotland, but this could very well be the most beautiful railway station in the world.
Spend a luxurious penny

The ferry from Wemyss Bay to Rothesay on the Isle of Bute takes 35 minutes. The signage suggests occasional onboard mischief. “Abusive behaviour towards staff will not be tolerated” and there is the curious “Newspapers for sale only” which made me wonder what people had been doing with the papers other than buying them.  This was a very peaceful crossing with only the gentle purring of the engine and occasional rattle of the railings to be heard.

Believe it or not one of Rothesay’s main tourist attractions is the men’s public toilets. This is the only time you are likely to put the words ‘beautiful’ and ‘toilets’ in the same sentence. Like Wemyss Bay station the toilets were designed to impress the hardworking Glaswegians on their holidays. They have a mosaic floor and 14 white porcelain urinals topped with shiny imitation marble. The bowls in the cubicles are stamped “The Deluge”. 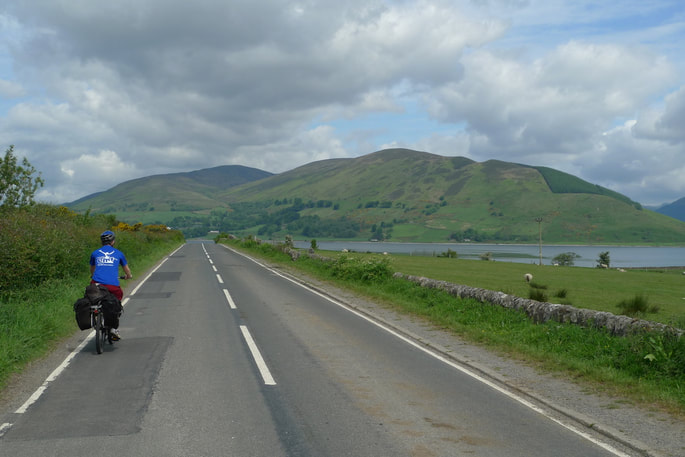 Roads on the Isle of Bute with views of the hills of Cowan
In keeping with the seaside theme I could smell chips as we cycled. We passed Old Quay Cafe, Anchor Pub and made our way along Shore Road. When the buildings began to thin out and the road curved around the bay we reached an old fashioned iron sign post. It pointed the way to Rhubodach Ferry.

I did not expect such striking countryside on the outskirts of a seaside town. On our right are views across the sparkling blue water to Rothesay. On our left are fields of grass, mowed neatly by that white fluffy creature. A group of sheep were lying down fast asleep and I thought, ‘how lazy, it’s 11 o’clock!’

The road turned inland and presented us with a steady climb. The hills of Cowan exploded into view when we got to the top. They totally dominated the scene, towering over Loch Striven and topped with whipped clouds. It was a straight, wide and empty road with the bold, smooth and green hills ahead. If ever there was a perfect scene to capture the joy of cycling in Scotland this was it.

After the short ferry crossing from Rhubodach to Colintravie we turned off the main road onto a narrow track that took us closer to the coast. Here we had fern covered forests to look at and bird song to listen to. The tarmac was covered in tiny shards of what appeared to be broken pottery. Then I spotted a gull tackling a mussel with his beak and I realised that our path was littered with the fragments of shells, broken open by hungry seabirds. 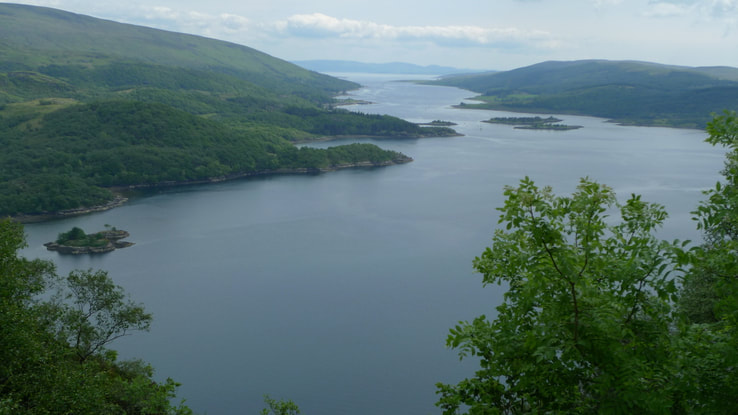 Kyles of Bute
On the A8003 there was a long ascent to Tighnabruaich viewpoint. A coach pulled up and about forty people got out, jostled for position, took photos and within five minutes were back on the coach again. The small amount of parking space pressures drivers to leave quickly to make way for the next vehicles. With our bicycles we could spend as long as we liked here. In fact, we waited until we had it to ourselves.

The narrow sea channel called the Kyles of Bute cuts through tree-covered hills and we spotted at least three islands. One of them was tiny and very rocky, but was home to half a dozen trees and bushes. I wondered if anybody had ever taken a boat out and set foot on this miniature island.
As we cycled on I noticed that rhododendrons were everywhere. Their violet-purple flowers are eye-catching, but this plant is not welcome here. It was introduced to Britain as an ornamental shrub in 1763, but it has suffocated the land. Nothing can grow alongside it because it is so dense and blocks out light. It poisons the soil and hosts a fungus that is linked to tree diseases. Around 12,000 acres of Argyll and Bute are covered in rhododendron, hence why "rhodie-bashing" is an important form of conservation.

Our penultimate ferry crossing was from Potravadie to Tarbert. This is a 25 minute crossing. I watched two men admiring a lorry with a crane that was parked on the deck. One of the men asked, “How much does it lift?” The other man had blue overalls and said proudly, “it does about 4 tonnes.” I stared down at the water we were gliding across, enjoying the hypnotic effect of focusing on the wavelets and letting every thought of work and stress evaporate.

Fuelled by a half-pint of beer and bag of chips taken on Tarbert’s sunny harbour we powered the five miles to Kennacraig for the Islay ferry.

MV Hebridean Isles had a happy atmosphere onboard as most people were on their way to the Islay Festival. In the bar the till was constantly pinging- Islay single malts were on special offer. We took a couple of bottles of Black Rock Ale by the Islay Ales Company to the deck. The setting sun was shining right in my face as I enjoyed my first taste of Islay. The Paps of Jura, the three mountains on the island of Jura, stood sentinel on the horizon. From this distance they looked like rolling waves on a stormy sea. As we got closer their appearance changed to craggy, steep and sharp peaks.  Seeing these mountains made this journey feel like an adventure. We had cycled 33 miles, taken a train and travelled on four ferries to get to Islay- that is certainly an epic adventure.

Continue to part two of this journey: Whisky island

View Getting to Islay in a larger map
Getting there
Wemyss Bay is about 50 minutes by train from Glasgow Central. Trains from London to Glasgow take about 4 hours 30 minutes.

This trip requires pre-planning with the ferry times- the Caledonian MacBrayne website will help.The last ferry onto Islay leaves Kennacraig at 6.00pm, so you have to make sure that you leave plenty of time catch this. The other option is to stay the night somewhere near Kennacraig and then take a morning or afternoon ferry to Islay.

Another option is to take a train from Glasgow to Gourock where you can catch a ferry to Dunoon. Then cycle to Portavadie. This route has one less ferry crossing.

On Wednesday only there is a ferry from Oban to Islay leaving in the afternoon. This might be a better option because you can take a train directly to Oban.
Cycling distances and terrain
There is 33 miles of cycling on mostly quiet roads. There are a number of hills, some are very steep.

Things to see and do
There will not be much time to stop and see things if you try to reach Islay in a single day from Glasgow. If you have longer you could visit Mount Stuart on the Isle of Bute. It is a magnificent Victorian mansion, believed to be the first house in the world to have a heated indoor swimming pool.

Where to stay and eat
We had dinner on the Islay ferry as there was not time to stop and have a meal. The food on the ferry is good quality and good value. If you are going to stay the night Tarbert is a good option because it is close to where the Islay ferry departs.