Mither Tap
From Alford to Inverurie 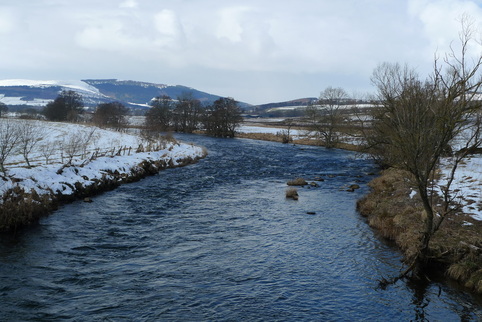 The River Don seen from Bridge of Alford at the Forbes Arms Hotel
“I caught a salmon, then it bloody slid back down the snow into the water. Serves me right for mucking about!”

The fishermen staying at the Forbes Arms Hotel were having some breakfast banter. One was outside sucking on a cigarette and his friends inside had opened up the conservatory window so that they could talk. They had thick Glasgow accents, hang-over stubble and rasping coughs.

They were full of bravado about their exploits in trying to evade a gamekeeper. The one with the NYC sweatshirt and red nose said “I didn’t even have my cast out and he found me. He says ‘you lads need to go cause you don’t have a permit.’ He was okay about it, not a cheeky so and so, but I didn’t like how he said ‘have a nice day’ when he left us.”

I was the only other person in the breakfast room and feeling out of place. I was staying in a hotel primarily aimed at fishermen. I knew nothing about fishing. Everything about us was opposites. I was lean, they had beer guts. I had the grilled kippers, they ate the full Scottish breakfast. I was travelling on my own; they were on a lad’s holiday.

One of them had yet to catch a fish after three days on the river. His buddy joked, “You’re so rotten at fishin’ that if I sent you out to get a fish supper from the takeaway you’d come back with only the chips!” The others burst out laughing, with fits of coughing in between, which lasted for almost five minutes.

Less than an hour ago things were very different. I arrived to find the breakfast room empty. It was 8.30am and there was no sign of anyone. Something was not right. Where was everybody?

I heard knocking on the main door to the hotel. I peered out of a window and saw that it was two staff members unable to get inside. A topless fisherman came crashing down the stairs and figured out how to open the door. One of the staff members said “oh no, he’s only forgotten the clocks went forward!”

There was a bit of a delay to my breakfast being served, but I took it in good humour. The hotel owner appeared and said, “I gather the clocks went forward. Ah totally forgot.” His deadpan delivery and flustered appearance had me laughing.

As I ate my fish the hotel’s fluffy white cat mooched by and the black Labrador gave that doggy cute look in the hope of a titbit. The owner always tried to get the animals away, but I didn’t mind them. I gazed at the gently rising fields and the River Don flowing by and I knew that I would miss this place.

I checked my bike over and loaded up the panniers. It always amazes me that this is my way home, this simple machine. It feels so small and insignificant on the big roads with lorries, hatchbacks and delivery vans speeding by. They will always get there before me, but my journey will always be more of an adventure.

All around me were snowy fields, some with animal footprints leading towards the tree line. I disturbed a huge flock of geese and they took flight making lots of noise about it. A pheasant crossed the road in front of me with his comical walk that always makes me smile. I chanced upon a Greater Spotted Woodpecker. His black and white feathers made him easy to spy. He was drumming on tree bark with his beak in order to get at the insects inside. He would be useful to have around if you need to do some DIY- he can do 10-15 strikes per second when making that hole.

I reached the entrance to Auchnagathle farm where there was a wooden box containing duck eggs for sale. Inside there was one carton remaining. On it the words “Eggs from lucky ducks” was printed alongside a drawing of a male and female duck with a wooden duck house. There was an honesty box to deposit the money. I didn’t make a purchase, but I loved the idea of buying eggs from the bottom of a farm track, instead of having to queue up at a supermarket checkout.

Easter Aquhorthies Stone Circle. Don’t you just love this name? The challenge of pronouncing it had me repeating it in my head over and over, searching for the correct way of saying it. Or is that just me? Anyway, I paid a visit to this 4000 year old monument, one of the best preserved stone circles to be found anywhere. This gave me the joyful opportunity to get my feet crunching into deep snow as there was a 400metre uphill walk to reach them. It is thought that the stones were arranged for lunar observations and the word “aquhorthie” possibly comes from the Gaelic for “field of prayer.” The location is impressive with unobstructed views towards Mither Tap, one of the highest and most distinctive peaks in the Bennachie range of hills.

“To Hell with your Alps, Rockies and Himalaya, Bennachie is the hill for me.” Lord Aberdeen

This is what surprised me the most about this landscape- that there are actually hills. Although I assumed Aberdeenshire to be predominately flat, there was a fair amount of uphill sections for my legs to cope with. Mither Tap, at 519m, is a relative baby when placed alongside Scotland’s more famous Munros, but it gives the impression of being higher because of the flat land that surrounds it.

Earlier I had stopped at the Bennachie visitor centre, the staging post for hiking in the hills. I had no time to do the walk, but spent a few minutes in the bird hide using binoculars to watch the feeding frenzy. This was fascinating. There were dozens of small birds, pecking and grabbing hold of the feeders with their feet and then flying off once they got their fill. 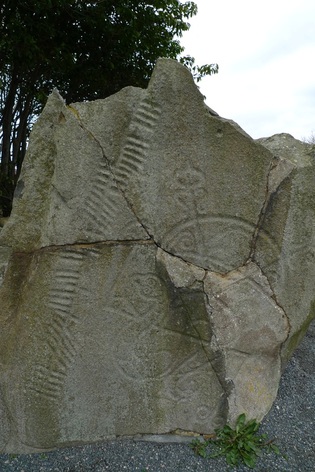 Brandsbutt Symbol Stone, Inverurie
Inverurie, the place from where I take the train home, is on the other side of the A96. I somehow had to get across this busy and fast road. I checked my  map and found a crossing point with a roundabout marked on it. No way, I thought, I am not tackling a potentially major roundabout! A bit further on there is a minor road crossing over the A96 which looked a much safer bet. As I approached it I started to feel nervous with the volume of traffic passing by. I took a deep breath- all I had to do was wait for a gap in the traffic and ride across. It was not long and I sped over to the safety of the minor road. Before getting on the train I decided to make for the Brandsbutt Symbol Stone, largely because it is the most strangely located Pictish stone that I have come across.

This stone is in an Inverurie suburban housing estate, next to a bus stop. All of the other Pictish stones that I have visited are always in remote countryside, so it was unusual to find a stone so close to the humdrum of modern life. It made it more challenging to imagine the world in which this stone was created. A hatchback with an awful sounding exhaust drove by, a chap with his hood up was blasting heavy metal music into his earphones and a nearby garden had an immense collection of gnomes. The ancient stone is among this. It is badly cracked, as if damaged by an earthquake, but it turns out that it had been deliberately broken up to be used for a dyke and then restored to how we see it today.

The stone features a striking carving of a serpent, its body flowing like a meandering river and a pair of large eyes on its head. He looked a tough character; I could imagine him hunting down some pray. He looked capable of catching a salmon for dinner, unlike some Glaswegian fishermen that I knew.

This is part three of a cycle travel feature in this region. Read part one
Getting there
Inverurie is 25 minutes from Aberdeen by train. Aberdeen is around 2.5 hours from Edinburgh, or 7 to 8 hours from Aberdeen. Part one of this journey provides more travel options.

Cycling distances and terrain
From Bridge of Alford to Inverurie the distance is around 15 miles. There are some hilly sections on the route, but nothing too strenuous. The roads are mainly B-roads which are mainly light on traffic, but this route is best tackled by cyclists who are confident in traffic.

Things to see and do
The Easter Aquhorthies stone circle is free to visit, as is the Brandsbutt Symbol Stone. If you have time you could hike up Mither Tap.

Where to stay and eat
Alford and Inverurie have plenty of cafes, pubs and restaurants.