If I told you that the world’s shortest street is in Wick, in the far north of Scotland, would you believe me?

If I told you that there is a hotel on the world’s shortest street would you believe me?

Both of these facts are true.

By some quirk of town planning the door to Mackays Hotel bistro is the only thing on Ebenezer Place in Wick. The Guinness Book of Records states that this is the world’s shortest street at 2.06 metres. When the hotel was constructed in 1883 it was shaped like a triangle. The council decided that the pointy end was a street and ordered the owner to put a name on it.

It was a unique location for my post-cycle dinner. It was fun trying to find the street and then doing a double take when I saw that the single door really is the only thing there. I savoured the privilege of walking through the door on the world’s shortest street.  I kept looking at the triangular shape of the room that tapers to the door and thinking how ridiculous it was that this was what led the council to demand a street name.

The bistro was relaxed with friendly and efficient staff. The food was stunning with a menu strong on local produce. A salad with Dornoch leaves for the starter followed by Scrabster hake. The dessert was summer pudding with Halkirk berries.
Prime Minister's Tipple

Halkirk was one of the places I cycled through today. In fact, I stopped there to escape the rain when I noticed a sign for an exhibition at the Ross Institute. For a village hall this building is magnificent and it was quite a shock to my senses having spent hours seeing nothing but peat bogs followed by farming country. It is Scottish Baronial style meaning you get plenty of turrets and a clock tower. This was the very first electric clock to be installed on a public building in Scotland- another little piece of trivia to add to the one about the shortest street.

Inside I found a room full of information boards and exhibits. A man was shifting boxes around and stopped to tell me about the building. “It’s named after a local man- John Ross- who moved to New Zealand and set up a clothing business. He made his fortune and gave some money to build this place. It is a very popular hall with clubs and meetings, but we are able to use it in the summer for the heritage exhibition. This is us setting up today. But what we really want is to build a motor museum.” He explained that there are around 30 classic cars in Halkirk. The man who used to own the garage collected them over the years, but he was in his 80s and no longer wanted to look after them.

I was interested to discover from the exhibition that Halkirk once had a whisky distillery. It had been particularly popular with London politicians, including Prime Minister Sir Robert Peel. Halkirk felt as far away as you could get from the hustle and bustle of Downing Street and I wondered if those eminent men had ever allowed their imaginations to picture the place their favourite tipple had come from. 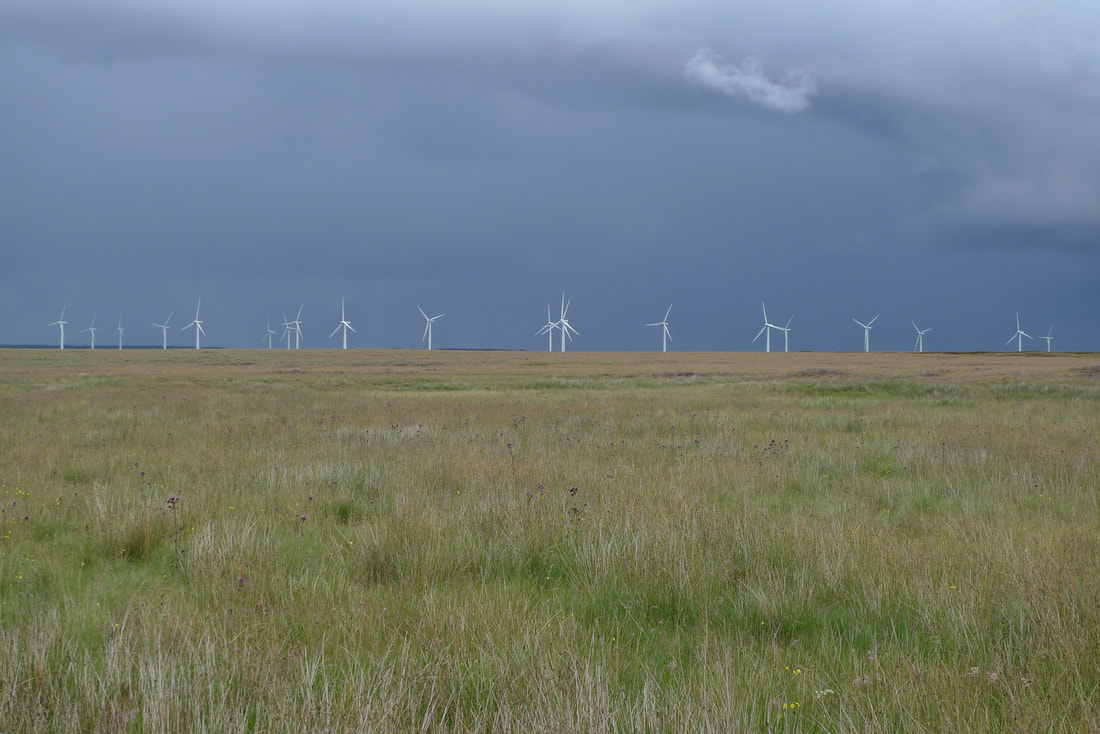 Wind farm on the horizon, near Halkirk
The museum man was struggling with a leaflet rack so I helped him carry it to the next room. A woman with a blue cardigan was at a desk and writing in a notebook. She looked up and saw me with the rack and said “here’s you thinking you came for a visit, but you’re having to work!” I laughed and was about to say I was happy to help, but she was eager to get back to business and started reading out room bookings from the notebook, “Chest, Heart and Stroke have booked in for the 17th.”

I excused myself, leaving them to the important work of running the Ross Institute. Across the street I noticed another handsome building. It is the Ulbster Arms Hotel with its striking white painted Caithness stone surrounding the windows and doors. There are chandeliers made of deer antlers in the restaurant and an open fire in the lounge bar. I think this was a good enough reason for a return visit to Halkirk.

To reach Halkirk I had cycled from the isolated Altnabreac station. It was a rough and bumpy road and I had seen no other person. When I finally hit the tarmac I expected to come across signs of humanity, but it felt just as isolated. There were farms and cottages, but not many and there was no sign of life at these buildings. At one point I stopped to listen- a cockerel, a cow mooing, a dog barking, and some song birds, but mostly the cockerel. No human sounds. It was only when a tractor passed that I stopped believing that something might have happened and I was the only person left in the area. 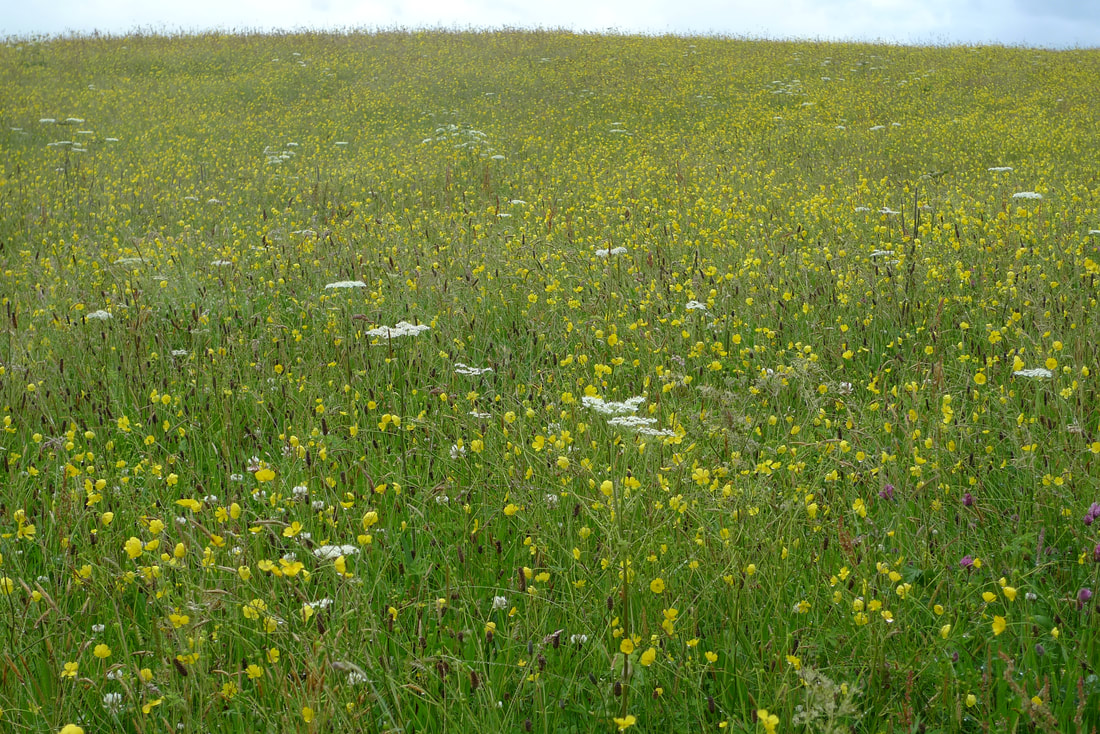 Pretty is the word I would use to describe this land. There were no spectacular mountains, lochs or forests, but rolling fields with their greens and their browns. There were buttercups everywhere and one field was entirely carpeted with them. Spiky blue thistles thrived along the road verge.

With low traffic volume and not a whole lot to look at this was one of those cycles where it was easy to let my mind wander and simply enjoy the pleasure of a good pedaling rhythm.

There was constant rain during the ride. It was frustrating because I could see blue skies ahead, but I never seemed to quite reach them. It kept flirting between light drizzle and heavy downpour. My camera broke because some rain managed to get into the lens. I had taken this camera to many countries and in all kinds of weather, but it was Scottish rain that finally got the better of it!

There are several ways to reach Wick and I took an indirect route in order to take a closer look at Scotscalder station. I did it out of curiosity to see how it compared to Altnabreac station for remoteness. What a charming little station Scotscalder turned out to be. It serves a scattering of farms. There is no village, no shop, no post office. Only fields. The cottage is now a private home, but retains the original old fashioned British Railways station sign with classic typeface. There is also a vintage railway clock fixed to the building. It felt like a set from a period drama and if a steam train pulled up at that moment it would have felt perfectly normal.

The final approach into Wick was along the lively A99, but it has a cycle path. My jolt back into “civilization” was the instant increase in traffic and the sudden appearance of a giant of the supermarket industry housed in typical warehouse-like structure with sprawling car park. I might as well have entered a London borough rather than the far north of  Scotland. I came to escape this kind of thing, but I was being selfish. Why should the people who live here be denied the same conveniences I enjoy for the sake of it looking nice for tourists.

But Wick does look good. The town centre has attractive buildings and a pedestrianised high street with floral displays. There is a river with a fine stone bridge crossing it. The most northerly distillery on the Scottish mainland, Old Pultney, is in Wick and in 2011 was named the world's best whisky. Sitting in the bistro of Mackay’s Hotel I was glad that I had come to Wick and seen for myself that there is plenty to like. After all what could be better than eating delicious food on the world’s shortest street?

View Westerdale to Wick in a larger map
Getting there
This is a continuation of a cycle route that began at Altnabreac station. The journey guide to Altnabreac has details about how to get there. Or you can travel directly to Wick by train which takes around 4 hours and 15 minutes from Inverness. Edinburgh to Inverness takes 3.5 to 4 hours by train. London to Inverness is around 8 hours.

Cycling distances and terrain
Following this route all the way from Altnabreac is 37 miles. This section from Westerdale to Wick is about 26.5 miles.

This is rolling farm country so there are some hills, but none very tough. The roads are well-surfaced and mainly quiet until the final approach into Wick on the A99, but this does have a shared pavement and cycle path. There are other routes into Wick- a more direct route would be via Watten, but this means missing out Halkirk.
Things to see and do
The reason to bring a bike to this part of Scotland is to enjoy good roads with little traffic. If you come in the summer the heritage museum will be open in Halkirk's Ross Institute (free entry). Wick has plenty to see and do and you can read about this in the next guide.

Where to stay and eat
I stayed at the Impala Bed and Breakfast which is good value with friendly and helpful owners who gave me lots of information about what to see and do. It is located in a modern house, not too far from the centre of Wick. The rooms are comfortable and very quiet so ideal for a good sleep after a long cycle.

Mackays Hotel has spacious and comfortable rooms. The restaurant is excellent. Read my review of Mackays Hotel.