No Place for the Devil
​Cycling Islay

What is a whisky distillery like at 6.30 in the morning?

I was lying in bed and just about to drift off when this question popped into my head. I had seen distilleries when they are full of visitors, the tills ringing in the shop, people eagerly queuing for their free sample. I wondered what it would be like before the official opening time. I am always looking for new ways to experience places, hoping to find something unique, something special.  Caol Ila distillery was ten minutes cycling from our cottage at Port Askaig, so this was my chance. I set my alarm.

A single track road descends past immaculate white cottages with the mountains of Jura providing a stunning panorama for anybody breakfasting in those houses. For an industry that contributes £2.7 billion towards Scotland’s economy these surroundings seem unlikely. No ugly factory buildings, no noisy machinery and no nasty smells. 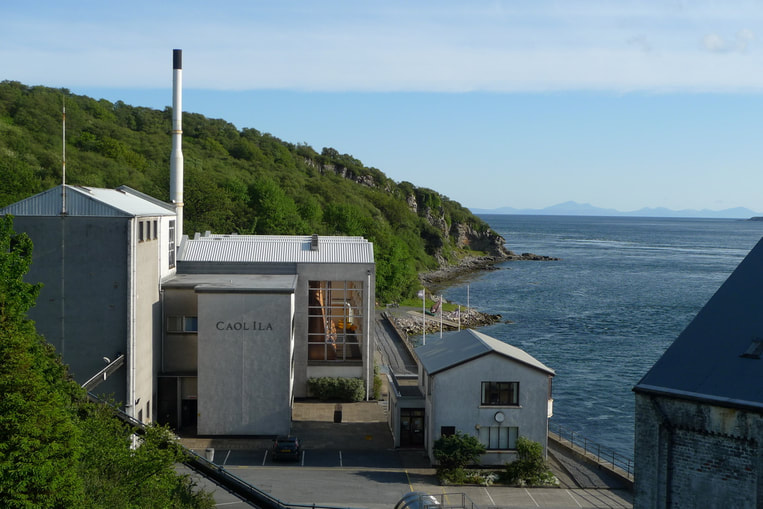 Caol Ila distillery
Only a nice smell- the sweet, malty scent of the whisky. There is utter stillness. Through the glass front of the distillery I can see the six copper stills sparkling from the rapidly erupting sun. Inside the warehouse the precious liquid contained in the thousands of barrels was getting on with its job of maturing. Time is the only resource needed for this. Time does not make noise, does not require heavy machinery and does not disturb.

This was our final day on Islay and we aimed our wheels in the direction of Bowmore, home of Islay’s oldest distillery, and planned to stop whenever we saw something interesting. It was only a few peddle strokes until our first diversion, marked by a brown tourist sign, “Finlaggan.”
We proceeded along a farm road and passed a notice that warned “LAMBS! Motorists please drive SLOWLY if a lamb comes near, STOP till it moves away.” It seemed that drivers were so eager to get to Finlaggan that they did not look out for the lambs.

The visitor centre revealed that Finlaggan had once been the place from where most of Scotland’s Atlantic islands and coast was ruled from. This had been the base of the Lordship of the Isles in the fourteenth and fifteenth centuries. A wooden bridge led us through tall reeds that almost obscured the water they spiked up from. We were now on the Council Island that was the bastion of the Lordship where meetings took place and new Lords were proclaimed.

All that remains are some ruins that include a Great Hall and a chapel that has a grave stone with a highly detailed carving of a warrior. I peered through the glass protecting him from decay. He grasped a sword that was almost as tall as him and I wondered if he had swung and thrashed this in a long forgotten battle to defend the island against marauders.

The ruined chapel at Finlaggan
In Ballygrant the opening hours sign on the café for Saturday was “09.30 – whenever”. For such a relaxed place Ballygrant has a surprising story of industry. There used to be a distillery on the nearby farm that created over 12,000 gallons of spirit in a year. Lead and silver mining was considerable with 1,214 ounces of silver being extracted in 1880. Some of the houses had been built for miners from Wales who came to work here.

“Steven Spielberg sent me a crate of wine.”

Islay Woollen Mill was established in 1883 and the track to it opened up to an idyllic scene of stone buildings next to a rushing river with banks thick with trees. On top of a picnic table there were about 15 onions recently dug up from the ground with their leaves and roots still attached. Inside, the place was crammed full of tweed scarves, caps and throws.
The owner took us on short tour of the mill. There are wooden floors, a creaky staircase and Victorian looms. “I’ve done loads of films. Braveheart- that was me. Rob Roy- that was me.” He was clearly proud of his textiles and their celebrity status. “My latest was War Horse. Steven Spielberg sent me a crate of wine. What do you boys do for a living?”

There was really no point in answering. After being told of these amazing achievements there was no way our jobs could possibly sound as interesting. 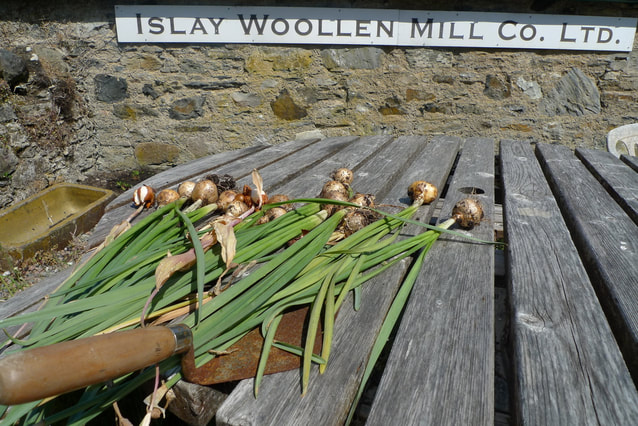 Onions at Islay Woolen Mill
This is not the most scenically outstanding stretch of road on Islay. It is inland so has no views of the coast. It felt functional with perfect tarmac and white line down the middle, rather than the single track twisty roads that we had enjoyed on Jura and other parts of Islay. It was good then that the A846 was blessed with many diversions.

Next up was Islay House Square which is home to Islay Ales brewery, Islay Studios and Islay Chocolate Company. I went into M A Mackinnons who specialize in preserves and sampled a Heavily Peated Marmalade on an oatcake. I was expecting the whisky taste to obscure the fruit, but it was a lot more subtle with only a hint of smokiness and I liked it enough to buy a jar.
Somewhere behind all the shops I found a door in a high wall.  It was like the way to the secret garden. On opening it I discovered an immense area of flowers, trees and vegetables. About half a dozen women were kneeling down with spades busily planting. I felt like I had accidentally stumbled upon a private and special place of devotion to gardening. One of the women told me that this was a community garden and you could buy cucumber, tomatoes, herbs, onions, spinach and lots of other produce. It was inspiring and it made me want to get my garden landscaped like this.

No hiding place for the Devil 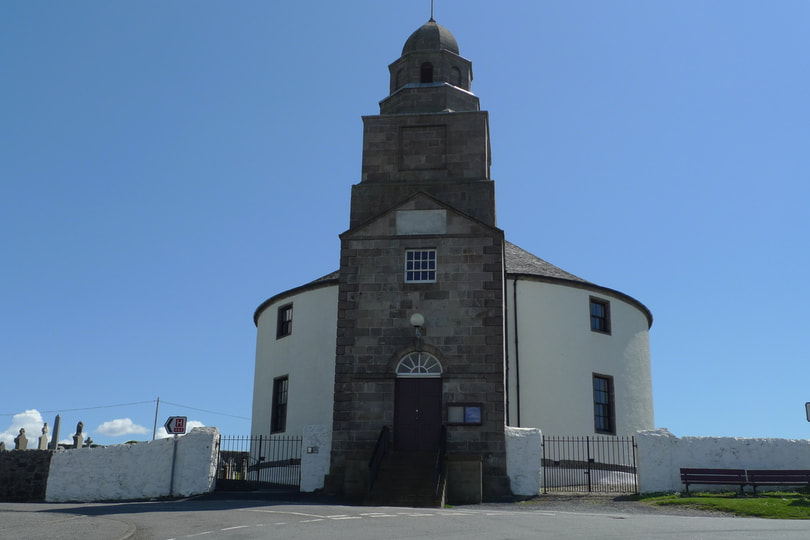 Round church in Bowmore
Bowmore’s most striking building is at the top of the town on Main Street. Like the Islay distilleries it is resplendently white, apart from the central tower. I had to get a closer look to see if it really was round. I walked outside the building and satisfied myself that the roundness continued all the way. Inside, the “u” shaped gallery even had curved pews to follow the shape of the building and make sure that everyone faced the front. Why is it round? It could simply be that the architect wished his masterpiece to standout because in the 1760s Bowmore was a planned village with wide grid plan streets and the church was to be the focal point, but there is another explanation that is more colourful. The church shape meant that there would be no corners for the devil to hide in.
We had lunch in the conservatory of the Harbour Inn. The hotel has a shop for the Islay Slate company and whilst we waited for our Salmon Fishcakes, with chive and poppy seeds, avocado purée and fennel salad I browsed the collection. There are coasters, cheeseboards and mouse mats with unique designs. I love the feel of slate- smoothness between natural ripples.

Bowmore single malt whisky has been made on Islay since 1779. It is the very first distillery on the island and the building, right in the centre of the town, is white as Christmas cake icing with "Bowmore" in black and imposing writing on the seaward side. I bought a minature to enjoy later in the evening. Peat smoke and Atlantic sea-salt tickled my tongue- the taste of Islay.

We returned to Bridgend where there is a very busy junction (for an island) where one road returns to our cottage at Port Askaig and the other heads to Port Charlotte. Paul took the return road with the aim of visiting Bunnahabhain distillery. I wanted to try for Port Charlotte.

The road to Port Charlotte was coastal perfection. Beach and blue sea on my left and smooth farming land on my left. The road curved around the bay and the sun warmed my back. There were some people using the beach, but it was mostly empty and it was easy to find my own little spot for a seat on the sand. It was a ten mile cycle with uninterrupted sea views most of the way.

I stopped briefly at Bruichladdich distillery where I enjoyed a free sample and noticed that marketing and product presentation is an important part of this industry’s success. The packaging in a cylindrical tin, bottle shape and style of text is unique to this distillery. It gave it a modern and trendy look that was different to the more traditional feel of the design used for, say, Laphroaig. With over 100 distilleries in Scotland each must do what it can to stand out.

I ended my cycle at The Croft Kitchen in Port Charlotte. This was one of the best views I ever had to go with tea and a scone. I had a seat outside and the sea before me. It was peaceful and I felt relaxed and happy. My bike and my legs took me here. I did not want to leave.

The only thing stopping me from staying for the sunset was that I needed to peddle back to our cottage. But I was looking forward to that. I would have the sea for company and on the final approach to Port Askaig I would get to see the Paps of Jura in that soft early evening sunlight.

View Islay: Port Askaig to Bowmore and Port Charlotte in a larger map
Getting there
Islay can be reached by ferry from Kennacraig. To find out how to reach Islay by bicycle, train and ferry read about my journey in Biking and boating to Islay.

Cycling distances and terrain
This is about a 30 mile trip from Port Askaig to Port Charlotte with a diversion to Bowmore and then back to Port Askaig. The road is mainly flat with smooth tarmac and very easy to cycle on. Traffic is not too frequent, but much more than on Jura or the quiet roads to the south of Islay.

Things to see and do
The A846 has plenty of diversions, including Finlaggan, the ruins of the place where the Lord of the Isles once ruled over the islands and coastal settlements of Atlantic Scotland.

There are several places to shop for Islay products, including Islay Woollen Mill and Islay House Square.

Then there are the whisky distilleries. There are four along this route, including Bowmore which is in the heart of the town. Caol Ila distillery is a ten minute cycle from Port Askaig. Bruichladdich sits alongside the A846, not far from Port Charlotte.
Where to stay and eat
We based oursevles at Port Askaig and hired the self-catering cottage that is run by the Port Askaig Hotel. We were offered this at a rate of £45 per person per night. This included breakfast in the hotel. The decor was a little old-fashioned, but perfectly comfortable and breakfast was excellent.

The restaurant in the Port Askaig hotel is particularly strong on local seafood. I enjoyed very tasty grilled Islay langoustines in garlic, lemon and butter.

The advantage to staying at Port Askaig is that this is where the ferry to the mainland arrives and departs. The ferry to and from Jura also departs from here. The disadvantage is that it means you must cycle back the way you came, but as Islay is relatively small this is not a problem for reasonably fit cyclists.

The Harbour Inn in Bowmore is an award winning hotel and restaurant and a great spot for lunch.