“Take a ride...enjoy the countryside!” commanded the retro poster at Invergordon station. I could not have said it better myself.  Only two more stops and I would be off the train, drinking clean air and pedaling empty roads with only forests, rivers and mountains as companions.

My arrival station, Ardgay, was a universe away from my departure station, Edinburgh Haymarket. Haymarket overlooks a chaotic road junction and Ardgay overlooks the enticing waters of the Kyle of Sutherland.

Where are the jumping fish?

Within 30 minutes of my cycle I was stunned into stopping by the sight of the Shin railway viaduct, a bold iron lattice structure with a castle as a neighbour. This is Carbisdale Castle. It once belonged to Mary Carolyn Mitchell, the wife of the Duke of Sutherland, and had a dedicated room for the smoking of opium.

Invershin station, on one side of the viaduct, has a sadly dilapidated cottage. Trains do not routinely call at this station and will only stop if you wave them down. In a part of the country with populations spread far and wide it is almost unbelievable that the distance between Invershin and the next stop, Culrain, is the shortest between any two stations in the UK.

The steep road to the Falls of Shin was when I began to really enjoy the ride. Rushing water, the only sound, I stopped to appreciate a waterfall that was likely overlooked by car drivers eager to reach the visitor centre and the main falls. The higher I climbed the more the water music gave way to chirping birds. The ascent forced me to breathe deeper and take a big nose-full of Highland scent- moss, pine and Heather. 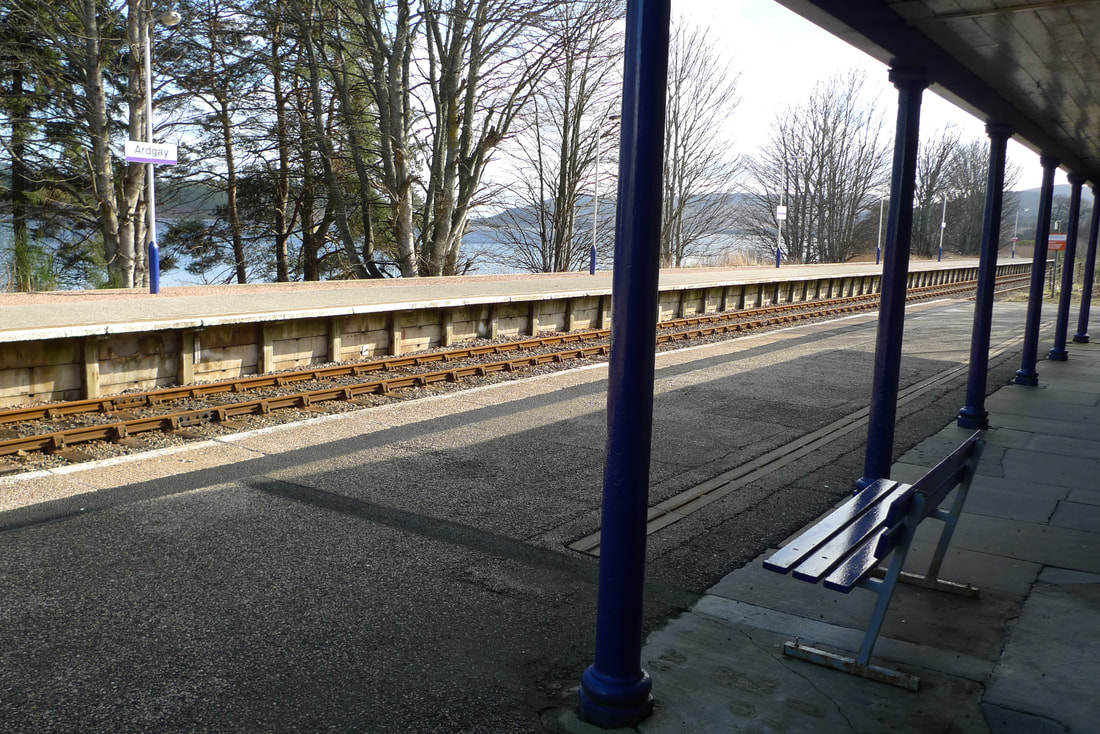 Ardgay train station
The Falls of Shin are known for the Atlantic salmon that leap up the falls to travel to their breeding grounds. Late summer is the best time to see the spectacle. I was here too early, but even without the athletic fishes the racket and tumble and churn of the falls is impressive.

Salmon is vital to Scotland’s heritage and economy. The Celts believed that you would gain knowledge and wisdom from eating the fish and salmon fishing in the Kyle of Sutherland is worth £3.8 million.

“Lovely when you get days like this at this time of year. No midges,” the woman in the cafe said as she handed over a bowl of hearty vegetable and rice soup. It was surprisingly sunny for early March and this season not only keeps away the beasties, but also attracts fewer visitors so that I was the only person enjoying the forest walks adjacent to the falls.
“Traveller! Stop and read with gratitude...”

This is the sign that greeted me at Bonar Bridge, where I stayed the night. It lists the Victorian worthies who were responsible for the first bridge, born out of a tragedy. Ferry was once the only way to cross and a boat capsized in 1809 with the deaths of 99 people. A disaster relief fund financed a Thomas Telford bridge. The current, and third, bridge dates from the 1970s.

I snuggled into the simple rooms of the Dunroamin Hotel. The bar and dining area had somewhat old fashioned and faded decor, but the food and hospitality more than made up for this. The beer battered fish and chips was one of the best I have had in ages. It had that perfect crispness on the chips and batter that seems to baffle many other restaurants.

For Lesley, the owner, the hotel was “an adventure” and she loved meeting people from all over. At my time of visiting the hotel was on the market as Lesley and her husband were planning to embark on another adventure. It involved Scotland, an American Airstream caravan and a television company. I will be looking out for them!

Before I retired for the evening Lesley asked if I would like the usual cooked breakfast, “Or how about something like South Uist smoked salmon and scrambled eggs?”

The voice inside my head was ecstatic, ‘Oh yes. I love this place!’ My real voice was more restrained. “Yes, the salmon sounds good.”

Cars: notable by their absence

In the morning (the breakfast did taste as good as it sounds) I set out for Croick Church, which is the site of a sad episode in Scotland’s history.

I was on a Brilliant Biking B-road or BBB. This is the phrase I created for those minor roads that attract little traffic and pass through countryside that has me constantly grinning and talking to myself, “This is beautiful. Really beautiful.”

My first encounter, of very few, with a vehicle was a red Mercedes making its way down the long drive of a country estate. The entrance was guarded by howling hounds carved in stone. They had coarse hair and their snouts pointed skywards.

The road follows the River Carron. I found a makeshift bridge to a rocky outcrop in the middle of the river. I scrambled across to reach the bit that was tumbling and splashing the most and watched it for so long that I lost track of where I was. 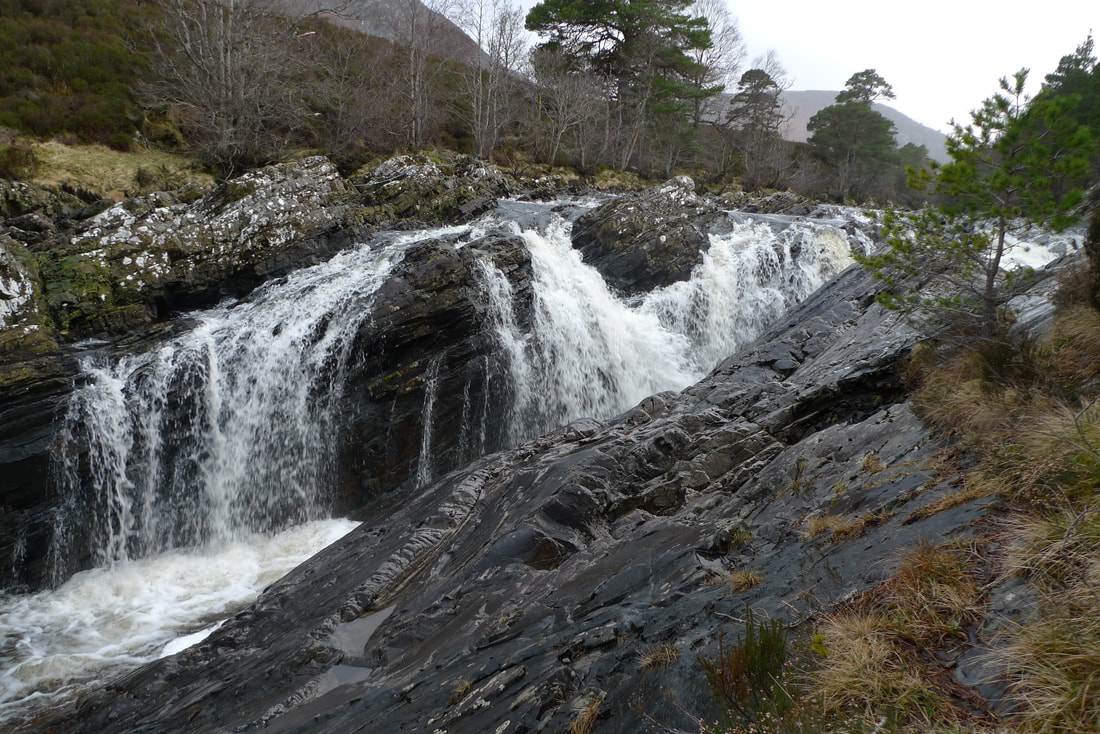 Glencalvie Falls
“A concern that lorries transporting fish through the village had been emptying water in the Lady Ross car park.” Ardgay and District Community Council Newsletter, Winter Edition 2011

There is something quite magical about seeing red phone boxes in remote locations. They are normally associated with the hustle and bustle of London streets, alongside black taxis and red buses. I forget that they can also be found deposited in splendid isolation. This particular box had no telephone inside, but twenty copies of the Ardgay and District Newsletter. According to this publication the population density of the area is 1.04 per sq km, but the badminton club has an impressive sixty members.

At the phone box I turned left and took a short detour to Glencalvie Falls. I was hemmed in by trees and I almost missed the path to the falls because it was marked with a tiny sign at ankle height. There was no choice but to proceed on foot and it very nearly felt like trailblazing as I charged through coarse Heather. The falls are plunging, rocky and deafening. They are also scary. The slippery path had no railing and if I tumbled there would be a long wait for help.
“Glencalvie people the wicked generation.”

This is one of the most revealing of the inscriptions carved into the glass window of Croick church. They were written in the 1850s by a group of 80 crofters who came here in desperation. They had been made homeless and jobless by their landlords who forced them off the land to make way for more profitable sheep farming, an episode known as the Highland Clearances. The refugees constructed a tent in the churchyard and tried to stay warm.

The incident was picked up by The Times:  “A fire was kindled in the churchyard, round which the poor children clustered. Two cradles with infants in them, were placed close to the fire, and sheltered round by the dejected-looking mothers. Others busied themselves into dividing the tent into compartments, by means of blankets for the different families. Contrasted with the gloomy dejection of the grown-up and the aged was the, perhaps, not less melancholy picture of the poor children thoughtlessly playing round the fire, pleased with the novelty of all around them.”

The newspaper men got their headlines, but there is no record of what happened to these people once they left the church and tried to put their lives back together. I was alone in the church with its simple, functional interior. I read the inscriptions on the glass and listened to the drizzle tapping on it and the wind howling. I tried to imagine just how cold it must have been in that tent, faced with an uncertain future.

The wind was behind me so I cruised all the way back to Ardgay station to catch the train. When we made our stop at Invergordon I noticed the poster again. There was no doubt that I had taken a ride and enjoyed the countryside.
View Ardgay cycle in a larger map
Getting there
Ardgay is a 1 hour and 20 minute train journey from Inverness. Inverness can be reached by train from Edinburgh in around 3 hours 30 minutes/4 hours. From London journey time is around 8 hours 30 minutes.

Roads are mainly flat with the most strenuous climb being the minor road up to the Falls of Shin.

Traffic is minimal to non-existent, except for the section on the A836 to reach the turn off for the Falls of Shin. Even so, by A-road standards it is not ferociously busy and it is nice and wide so that vehicles will be able to overtake cleanly.

What to see and do
Falls of Shin has a visitor centre with free entry that contains a cafe and gift shop. There are three easy forest walks signposted from the visitor centre.

Croick church has no facilities and no entry charge, but there is a donations box.

Balblair forest, just outside Bonar Bridge, provides wonderful walks and views over the Kyle of Sutherland.

Where to stay and eat
Dunroamin Hotel in Bonar Bridge costs around £67 per night bed and breakfast, double occupancy. The hotel is basic and comfortable. Evening meals are simple, traditional and delicious.

Caley Cafe and Craft Shop in Bonar Bridge is a great place to have sandwiches and homebaking with a view of the bridge and river.

The Crannag Bistro is also in Bonar Bridge. I did not eat here, but it has received great reviews.